A 29-year-old Fayetteville woman was charged with Speed in Zone and Aggravated Unlicensed Operation 3rd degree following an incident that occurred on Monday, April 18 at 3:41 p.m.

According to the report, investigation into a traffic stop on NYS Route 28 in Old Forge resulted in the arrest of the defendant for the above charges.

She was issued appearance tickets returnable to Town of Webb Court at a later date.

• A 32-year-old Boonville man was arrested on Friday, March 11, 2016 on an active arrest warrant from the Town of Webb Court for Failure to Appear.

The man was originally charged with Leaving the Scene of a Personal Injury Accident, Operating Out of Class (Commercial Motor Vehicle) and Aggravated Unlicensed Oper-ation 2nd Degree. END_OF_DOCUMENT_TOKEN_TO_BE_REPLACED

The Town of Webb Police Department held an Open House at their station on Thursday, October 29.

Children of all ages were invited to sit on Town of Webb police snowmobiles and NYS Department of Environmental Conservation (DEC) airboat and emergency vehicles.Photos

END_OF_DOCUMENT_TOKEN_TO_BE_REPLACED 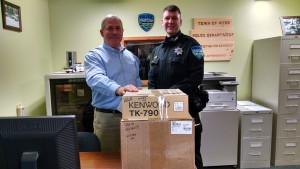 Herkimer County Sheriff Chris Farber was in Old Forge on Tuesday, October 27 to deliver a mobile radio and related equipment to the Town of Webb Police Department.

The equipment was acquired through a Homeland Security Grant administered through the Sheriff’s Office.

The Town of Webb Police Department has issued the following  report of recent law enforcement activity.

• A 23-year-old Old Forge man was charged with Unlawful Possession of Marijuana and Speed in Zone following an incident that occurred on Saturday, April 11 at 8:16 a.m. END_OF_DOCUMENT_TOKEN_TO_BE_REPLACED 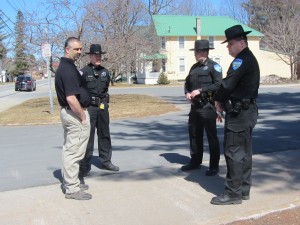