Chip and Katie Kiefer and Tim and Patty Foley, organizers of the annual St. Patrick’s Day Parade in Old Forge, are predicting the largest crowd ever for the Friday, March 14 event with the announcement that Eileen and Ron Hamlin of Remsen, parents of history-making Olympic bronze medalist Erin Hamlin, have accepted their invitation to be this year’s parade marshals. END_OF_DOCUMENT_TOKEN_TO_BE_REPLACED

The winter has taken a toll on Route 28 between Old Forge and Eagle Bay in the Town of Webb, according to Supervisor Ted Riehle, who said he has received many complaint calls recently from local motorists.

The potholes and dips on some sections are such that they threaten safety and risk damaging vehicles, Riehle said.

Republican committee members from around Hamilton County met Wednesday at Indian Lake and reaffirmed their January 9, 2014 vote to endorse Elise Stefanik of Willsboro as their choice for The United States’ House of Representatives in the 21st Congressional District. 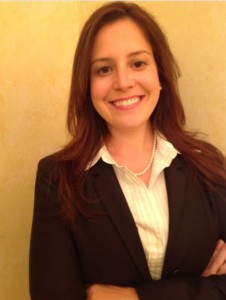 “The vote to endorse her was unanimous the first time and was unanimous again today. Nothing has happened in the interim to change any minds,” he said.  END_OF_DOCUMENT_TOKEN_TO_BE_REPLACED

The theme of the annual Parents as Reading Partners (PARP) program will be announced at a kick-off event at the Town of Webb School on Friday, February 28th. 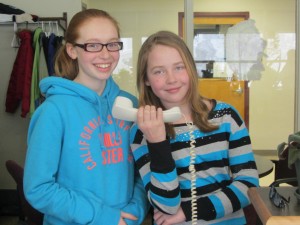 Fifth grade students S. Rowe and M. Prichard offered some hints as to the theme of this year’s PARP Program during school announcements on Wednesday, February 26th. Photo by Gina Greco

The program, which is held in conjunction with the Old Forge Library, encourages parents to read with their children for at least 15 minutes daily. It runs through April 2nd.

The library will have a special collection of books for lending that are related to this year’s PARP theme.  END_OF_DOCUMENT_TOKEN_TO_BE_REPLACED

Martin will represent the assemblyman at local meetings and events, help arrange scheduling, handle constituent issues and advise Butler on the many issues facing the county. END_OF_DOCUMENT_TOKEN_TO_BE_REPLACED

The Inlet Barnstormers Snowmobile Club will hold its annual dinner meeting—the final meeting of the year—at the Steak House in Thendara on Wednesday, March 12 at 5:30 p.m.

Anyone who has not yet made their reservations is asked to contact Barb Winslow at (315) 369-2241 no later than Wednesday, March 5 for reservations.

The Town of Webb received the New York Municipal Insurance Reciprocal (NYMIR) Risk Management Award on Monday at the 2014 Annual Meeting and Training School of the New York State Association of Towns. 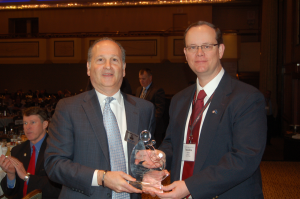 The award is given annually in recognition of a member municipality’s commitment to sound risk management, safety and training efforts.

The event was held at the New York Hilton in New York City, and Town of Webb Supervisor Ted Riehle was on hand to receive the award.  END_OF_DOCUMENT_TOKEN_TO_BE_REPLACED