A 23-year-old Little Falls woman was charged with Driving While Intoxicated following an incident that occurred on Thursday, March 17 at 11:23 p.m.

According to the report, an investigation into a disturbance at Fastrac resulted in the arrest of the defendant for the above charge.

She was issued an appearance ticket returnable to Town of Webb Court at a later date. 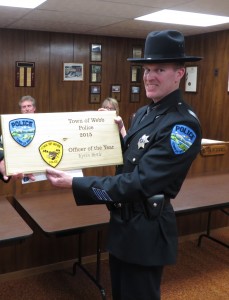 Town of Webb Police Chief Ron Johnston gave an annual report of his department on Tuesday, March 8, at the Town of Webb Board’s regular monthly meeting.

Chief Johnston said it had been the board’s request that he offer regular updates.

Additionally, Johnston bestowed commendations upon his officers, in the form of verbal praise and awards, including the naming of Kevin Birtle as Webb’s 2015 Officer of the Year.  END_OF_DOCUMENT_TOKEN_TO_BE_REPLACED

Following are the words of Town of Webb Police Chief Ron Johnston, that were given at a ceremony on Tuesday, March 8, 2016, in recognition of three of his officers.

I am awarding three commendations to Town of Webb Police Officers for their exemplary service to the citizens of Webb and as representatives of the Town of Webb Police Department during 2015. I have placed letters in their personnel files detailing their awards.  END_OF_DOCUMENT_TOKEN_TO_BE_REPLACED

• A 42-year-old Huntingdon, PA man was charged with Snowmobiling While Intoxicated Common Law and Operating Without Insurance on Sunday, January 17 at 11:32 p.m.

According to the report, the defendant was involved in a personal injury snowmobile accident in which he struck a utility pole while operating on Railroad Ave. in the village of Old Forge. He was transported by Old Forge Ambulance to a Utica hospital with unknown injuries.

He was issued an appearance ticket returnable to Town of Webb Court at a later date.

The Town of Webb Police Department is investigating the theft of a Yamaha EF2500 generator that occurred in Old Forge on Sunday, January 10th.

The theft happened during the evening hours, between 7 and 8 p.m., at 125 Riverside Lane, according to police.

Anyone with information about the generator should contact the Town of Webb Police Department at (315) 369-3157 and reference case #12596.

All calls will remain anonymous.

• A 64-year-old Old Forge man was charged with Harassment, 2nd degree following an incident that occurred on Thursday, August 6 at 11:46 a.m.

According to the report, the defendant was arrested following a complaint from a Kinney Drugs employee who stated that he had continued to harass her verbally on several occasions after she had asked him to stop. END_OF_DOCUMENT_TOKEN_TO_BE_REPLACED

The Town of Webb Police Department has reported the following law enforcement activity.

• A 34-year-old Clay, NY man was charged with Confinement of Companion Animal in Vehicle in Extreme Temperatures following an incident that occurred on Monday, July 13 at 1:05 p.m.

An investigation into a report of two dogs unattended in a vehicle resulted in the defendant being charged for the above offense.  END_OF_DOCUMENT_TOKEN_TO_BE_REPLACED