Raquette Lake Supply Company will begin preparations for the annual Raquette Lake Ice Harvest on Friday, February 10, a tradition that dates back over a hundred years.

Ice cutting on Adirondack lakes was originally—and still is—used as a means of refrigeration during the summer months.

During the winter, blocks of ice called cakes were cut and stored in insulated barns with an additional insulating layer of saw dust to keep the ice frozen in the summer months. END_OF_DOCUMENT_TOKEN_TO_BE_REPLACED

1,902 BOATS: Final count blows Pittsburgh out of the water, by Adele Burnett 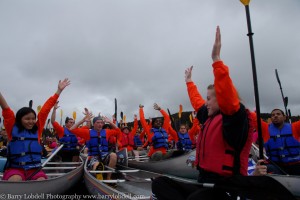 Inlet’s One Square Mile of Hope Committee has received notification from the Guinness Book of World Records(tm) that on January 31, 2012 their claim for the world’s largest raft formation of canoes, and kayaks, and guideboats was approved.

The new record, 1,902 boats, eclipses the previous record of 1,619 boats that was held by Paddle at the Point on June 5, 2010 in Pittsburgh, PA. END_OF_DOCUMENT_TOKEN_TO_BE_REPLACED 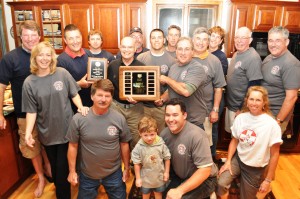 The Old Forge Ski Patrol at McCauley Mountain was awarded the 2010-2011 Outstanding Small Mountain Patrol of the Eastern Division by the National Ski Patrol. Brian Bamberger, who has been a member of the local ski patrol for 27 years, said the Eastern Division is comprised of Maine, New Hampshire, Vermont, Massachusetts, Connecticut, Rhode Island, Pennsylvania, New Jersey and New York state.

There are 7,500 to 8,000 patrollers in the Eastern Division according to Bamberger, who added that the McCauley Ski Patrol went on to take second place in the small mountain patrol National Division. “Our patrol is up to 28 people—all volunteers,” he said. END_OF_DOCUMENT_TOKEN_TO_BE_REPLACED

The Webb and Adirondack Communities Health Care Research Committee would like to remind taxpayers and visitors of the townships of Webb, Inlet, Long Lake (Raquette Lake), and Forestport (Woodgate, White Lake and Otter Lake), that the deadline for completion of the Town of Webb Health Care Survey is Friday, February 17.

Surveys were mailed to taxpayers in mid-January, and also appeared in local papers. END_OF_DOCUMENT_TOKEN_TO_BE_REPLACED

Create your favorite dessert and bring it to the library between 11 a.m. and 5 p.m. the day of the event to qualify for prizes in the Youth Student, Teen Student, Adult and Master categories.

A reception will be held from 7 to 8 p.m. and the community is invited to stop by and sample the delicious entries.

It’s no coincidence that the Town of Webb Varsity Ski Team is so strong.

We have an amazing community which helps support the Polar Bear Ski Club. Most of the kids on the team have been ski racing since they were seven or eight years old.

The Polar Bear Ski Club provides an outlet for the children of our community to get outside and away from television and video games.

They learn from a young age to spend their after-school time and entire weekend outdoors in the mountains that we so proudly call home. END_OF_DOCUMENT_TOKEN_TO_BE_REPLACED

Congratulations and thank you to Mayor Ainsworth and the Board of the Village of Herkimer on their unanimous vote to amend the zoning regulations to prevent the construction of a new county jail within the village limits. END_OF_DOCUMENT_TOKEN_TO_BE_REPLACED