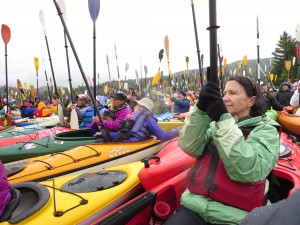 Despite the cool, damp weather, over 3,000 boats from 30 states, two Canadian Provinces, Thailand and Belgium converged on Fourth Lake in Inlet, NY on September 13 to shatter the Guinness World Record for the largest raft of canoes, kayaks and guide boats. 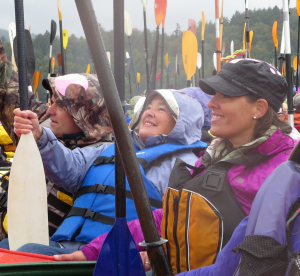 Terry Olsen, center, with son and daughter, Brendan and Stacey

The raft, held together only by hands, fulfilled a Guinness rule by free-floating for at least 30 seconds. 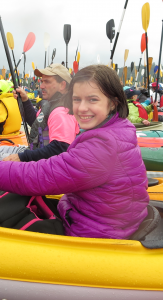 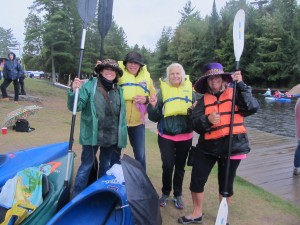 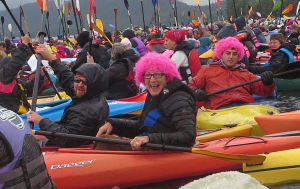 Earlier, videographers Eric Mishalanie and Casey Hamlin recorded the entry process as each boat picked up a numbered sticker and moved into the raft-up area.

All of this video and photographic evidence will be off to London in a few days so that Guinness can verify the accuracy of the count. 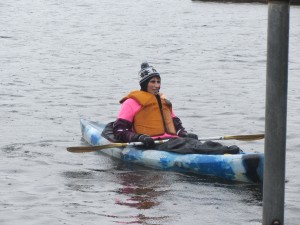 Kudos to Kiwanis of the Central Adirondacks and the One Square Mile of Hope Committee, co-chaired by Carolyn Belknap and Connie Perry, for a spectacularly organized event which raised over $100,000 to be donated to The Breast Cancer Research Foundation, Syracuse’s Upstate Medical Center Cancer Hospital, and Upstate’s Golisano Children’s Hospital for the treatment of children’s cancer.

Inlet has once again lived up to its title of “The Little Town That Could,” and did. 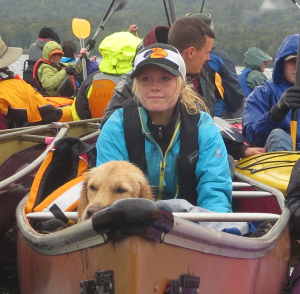