The magazine, like the TV program, highlights the arts, culture and heritage of the Mohawk Valley and surrounding areas.

The four-color monthly publication is available at its sponsoring businesses, including  Shelter and View of Old Forge, as well as at Stewart’s Shops in and around the Barneveld, Camden, Cooperstown and Sharon Springs areas. It is free of charge.

Sharry and Lance, along with host Richard Enders were in Old Forge on Wednesday, October 2 to talk with Bob Card about the Strand Theatre’s digitalization project and the renovation of the former Howard Johnson’s building, now occupied by the Front Door Diner and Back Door Bar.

The segment is scheduled to appear on October 6th.

After eight months of being off the air, the popular local television show Mohawk Valley Living will return to WKTV on Sunday, December 4. 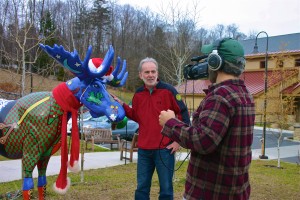 Producers Lance and Sharry Whitney of Clinton created the show with host Richard Enders and Gary VanRiper, who led the Adirondack Journal segment of the program.

But after six years of deadlines, they felt it was best to retire the show.

Their viewers, however, were not keen on their decision. END_OF_DOCUMENT_TOKEN_TO_BE_REPLACED