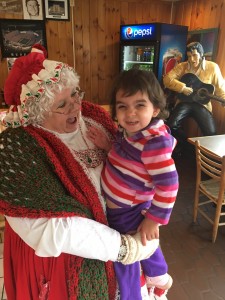 The Adirondack Christmas on Main Street event in Old Forge over the weekend of Novem-ber 27 through 29 attracted hundreds of visitors to the area.

A highlight of the weekend was the Friday night Light Parade up Main Street that led to Point Park for the tree lighting ceremony. 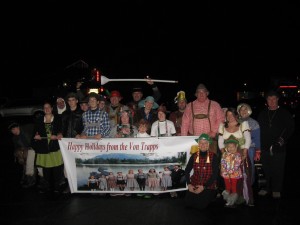 There were a record number of entries this year, with the local Ehrensbeck/Wilcox families—and a host of recruited friends— taking first place for their rendition of the Von Trapp family.

This is the fourth year of parade participation by the family, with four generations joining in on the fun.

All the major characters from the classic film, The Sound of Music, were represented.

Among the cast of 30 were Josh and Elizabeth Wilcox as Captain Von Trapp and the Baroness; cousin Margie Massett as Maria; Fred Ehrensbeck as a nun; young Sam, Charlie, Molly Wilcox and Asher and Oliver Murray as some of the Von Trapp children; and Anne Phinney’s goat Liam as, well, the goat.

Staying true to the story, Ellen Wilcox made her grandchildren’s outfits from yards of curtain fabric she had stashed away.

Flugel horns were made from PVC pipe and funnels, friends and their children were borrowed to fill out the cast, and Ricola cough drops were handed out to spectators as the song, The Lonely Goatherd, streamed from speakers.

Eva Ehrensbeck Erikksen and her brother Fred came up with the idea, a strong follow-up to previous entries, The Adirondack Avengers and The Macy’s Thanksgiving Parade B-Team.

“Christmas on Main Street brings us all together every year. It is such a lovely town. It is decorated so beautifully… everyone works so hard to get it ready for the holidays and make it so nice for people who come here,” Eva said.

In keeping with the spirit of the season, the families donated their prize of $300 to the St. Bartholomew Church Food Pantry.