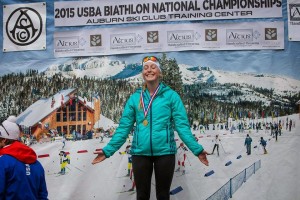 Maddie Phaneuf of Old Forge was recently named to the U.S. Biathlon National X-Team for the second consecutive year.

The X-Team has been identified as a training team for promising developmental athletes in the sport of winter biathlon which includes Nordic skiing and rifle marksmanship.

Phaneuf is the sole female athlete on this year’s three-member team. She kicked off the training season on May 5 in Lake Placid, where she will  be residing and training in preparation for the upcoming biathlon season.

At a ceremony recently held in Boston, MA, the U.S. Biathlon Foundation named Maddie the 2014-2015 Junior Woman Biathlete of the Year. She and her mother Janine attended the gala with other members of the U.S. National Team.

Phaneuf is getting ready to initiate a “Rally Me” fund-raising campaign designed to help offset the expenses associated with training and competing at the international level.  She is also seeking local sponsors to assist with her goal of representing the USA at the 2018 Winter Olympics in South Korea.

More information is available by visiting Maddie’s blog at: maddiebiathlon.blogspot.com.