People are still talking about the weather, although this week it’s been more favorable. The sun has been out and it even got above freezing a couple days. I hope the snow slides off my roof pretty soon. It’s going to come down with a crash as there is a lot of ice on the edge. 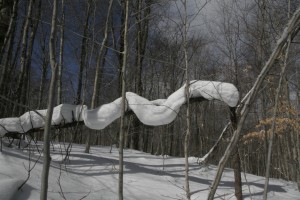 I was clearing a roof on the other side of Limekiln this afternoon. I heard what I thought was a generator starting up, but it was just the snow sliding off a tin roof at Shannon’s camp.

I was doing the Crane’s roof at the time, then I moved over to Richeson’s camp where they have tin on all the lower roofs.

Last year I had a problem with the big roof. It got so slippery near the end that I almost went off it several times.

I put the ladder up in a different spot…I won’t do that again. When I got up on the roof the whole side slid off and took my ladder with it. In all the years I’ve been doing roofs that has never happened.

There were a couple trees close by but it’s been a long time since I slid down a tree like a monkey.

I figured that as long as I was up there I might just as well scoop the roof  and think about the problem.

I needed the ladder to get on the upper story so that will have to wait until another day.

I cleared all the snow from the east side of the camp into a big pile that was only about five feet from the edge of the roof.

When I finished I jumped into the snow and planted myself up to  about my waist.

I was down, then all I had to do was get out of the pile and posthole back to my snowshoes.

If we get some rain I’m afraid some roofs may go down. I cleaned the snow off my neighbor’s boat today too as the weight would have shredded the canvas cover.

I don’t know just how much a square foot of snow weighs this year but it’s three to four feet deep in most places.

There has been a big snow snake growing out in the front yard. Today it was about as big as it’s going to get before it falls from the leaning tree it’s on.

I took a few pictures of it but kept far enough away so it didn’t jump on me.

One day I was taking some pictures of a big one along the Black Bear Mountain ski trail.

My black lab Sandy was playing around under the snow snake and it came crashing down nearly hitting her.

The one out front will probably be gone before the end of tomorrow as its sagging pretty low tonight.

With this heat wave the sugar maples are just waiting to give some folks their golden sap.

I never collected it myself but many locals do and make a project out of it.

It is a lot of work…but so is beaver trapping, and I still do that.

Every day was a trial when I checked traps this week. I have to cross some lakes to get to some back-in ponds and every day I break a new trail as the wind blows over the one I made two days before.

Sometimes I can get on the old path and stay on it all the way across the lake as it’s harder than the snow around it.

While checking the traps over there the wind blows over my new path making it just as tough coming back across.

There was about a quarter-inch of ice all over the trees and snow in one area I trap.

It wasn’t thick enough to hold me up so with every step I went to the bottom and then had to pull back up through the ice coating. It was not a fun trip.

Luckily the slush layer under the snow is still holding me up, but with a couple warm days that will change.

Another place I walked across a few times had no ice under it.

I don’t know why I didn’t fall in as the beaver activity has kept the ice thin there.

I go a different route now. When the beaver come out of their house they expel air under the ice around the food pile which doesn’t freeze.

If they need a breath of air they put their noses up near the ice in one of these air pockets and they are back in business.

They sometimes travel long distances under the ice to get to a feed station under the bank or come out a spring hole near the shore to get some new food.

This time of the year their food under the ice gets a little slimy so they look for some new food to eat.

Yesterday I saw  where they were out along the edge of the South Branch of the Moose River.

Most of these beavers lost their food piles in the high water we had this fall and they have had to work out all winter to survive.

Skiers may ski into April this year…but that’s another story.