Over 3,000 people gathered in the little town of Inlet, NY on Saturday, September 13, 2014 and set out on Fourth Lake to break the record for the largest raft of canoes and kayaks at the One Square Mile of Hope event. 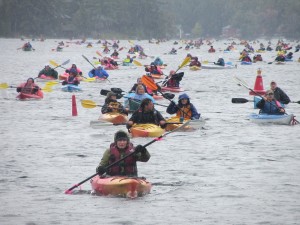 Both events were also fundraisers for the fight against breast cancer, raising over $132,000 between the two events.

After it was announced in 2013 that Suttons Bay, MI had broken our record, committee members from the previous events started the conversation of reclaiming it.

The 2014  date was set and this event took many months to plan.

A partnership was formed with Kiwanis of the Central Adirondacks and a core committee of 10 to 20 people began meeting regularly to work on the logistics, sponsorship, and details of this event. 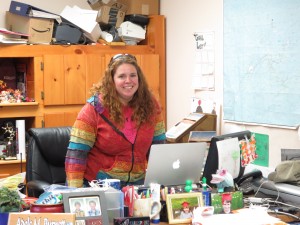 In addition to the record attempt, the event included food, live music, raffles, a silent auction and a Chinese raffle, and a health and wellness fair offering Zumba, TRX and yoga.

A website for the event listed rules, the schedule, maps, and more.

We worked with property owners around the Inlet end of Fourth Lake and established 14 launch locations and nine parking areas for the anticipated 2,500 boats and participants.

Large banners posting the rules for this event were placed near the water at each launch site.

Out on the water we placed markers to designate four corners and three “gates” of the designated area to begin forming the raft.

There was one pontoon boat on each of the four corners. There were two pontoon boats at each gate. 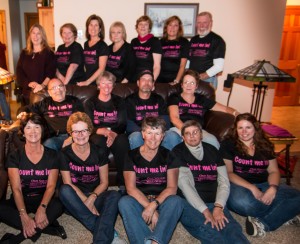 All ten of these boats each had at least three or more volunteers aboard.

In addition to these ten boats there were three more volunteer boats patrolling the perimeter of the designated area as well as several other boats that had New York State Department of Environmental Conservation Officers and New York State Sheriffs aboard.

Staging at the Fourth Lake Boat Launch was an ambulance manned with volunteer EMTs.

Set up at Arrowhead Lakefront was a command station that was able to communicate with the boats on the water, the volunteers at the launch sites and the committee members responsible for each aspect of the event.

Volunteers on the gate boats handed out numbered stickers one to each canoe and kayak as they entered the designated area.

These boats handed out a total of 2,970 stickers.

Video cameras, operated by Eric Mishalanie and Casey Hamlin, on a nearby cliff captured the handing out of stickers and the formation of the raft.

The weather was slightly uncooperative making it difficult for the barges to stay anchored and difficult for some of the boats to obtain their stickers.

At noon two seaplanes flew over the attempt.

One plane carried the photographer, Nancie Battaglia, who snapped still photos of the attempt.

The other plane, piloted by Jim Payne, carried the videographer, Lori Diemer, who took the video showing that the raft stayed together and floated for thirty seconds without becoming grounded or touching any land or any other craft.

Because of the inclement weather and the difficulty some had with the stickers, we decided it would be necessary to have an image of the raft blown up to be physically counted.

We used eight different colored map pins and placed them one on each boat in groups of 100.

We then had internal auditors look over the image again, adding some pins and taking a few away and came up with a final count of 3,150 boats.

In addition to the 20 committee members there were over 200 volunteers who helped mostly the day of the event and the couple weeks leading up to it.

We are proud of the people who braved the rain and cold to attend this event and along with them the sponsors and supporters who helped us raise another $100,000-plus for the fight against breast cancer.

Please see the complete list of sponsors at www.one
squaremileofhope.org.

At this time, $10,000 of the total amount raised is being sent to Upstate Cancer Center of Syracuse to be used for breast cancer research and another $10,000 for pediatric cancer care through the Clara Condie Fund at Upstate Golisano Children’s Hospital.

Following the sale of the posters and remaining t-shirts and hats, additional monies will be sent to each of these organizations.

If you happen to see any of these people, give them a smile and a little nod as a thank you for the many months of planning and hard work that went into this event.

Everything has been put together is being shipped off to Guinness for their approval. Keep checking the website and Facebook page for news.

If you have photos to share, you can do so by joining this group.

Event hats and t-shirts are available for purchase in the Inlet Information Office and online at www.onesquaremileofhope.org.

Posters will also be available soon!