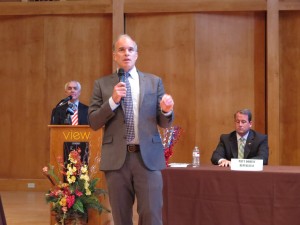 Democrat candidate Aaron Woolf wasted little time in announcing that his race for Congress is in full swing, now that Republicans have determined a 21st District candidate for next November’s election.

Woolf introduced what his campaign team is describing as a “bold government reform” agenda on Wednesday.

“Aaron Woolf is looking forward to continuing to discuss his positive agenda for creating jobs and growing the economy in the North Country,” said his campaign manager, Stuart Rosenberg.

Real change will come when Washington changes how it operates, Woolf said.

“I plan to adopt…common sense reforms to demonstrate that what is fair in the North Country is also fair in Washington,” he said.

People in the North Country must pay their own way, and those in Congress need to pay for theirs as well, he said.

“We should be directing hard-earned taxpayer money towards creating jobs, investing in our region, and growing our economy, not for plush congressional benefits. As a Congressman, I will live by the same rules that apply to my fellow New York 21 residents,” Woolf said.

He outlined five changes he would push for in Congress.

• No budget, no pay for Congress, Woolf said. And that means “for real”; no gimmickry.

• No funding for, nor use of, a taxpayer-funded gym or salon and barber shop by members of Congress on the public dime.

“It is unconscionable that numerous individuals in the House of Representa-tives took advantage of these perks during the shutdown of the government, while federal employees could not get paid,” Woolf said.

• No funding for, nor use of taxpayer money to pay for the rent or lease of vehicles.

• No funding for, nor use of, health care “perks” that are not available to the general public.

“Numerous lawmakers that have voted repeatedly to repeal the Affordable Care Act have voted for themselves taxpayer-funded lifetime health care plans,” Woolf said.

• No travel under the “charter jet” loophole. Members of Congress are currently allowed to use political campaign funds to upgrade a privately-funded flight to first class travel. This is a misuse of campaign funds by those in Congress, Woolf said.

“I am running for Congress to represent New York’s 21st District and bring the region’s spirit of independence, practicality, and hard work to Wash-ington,” he said.

“We do not need more of Washington’s divisive attitudes determining how we live here,” Woolf said.