We are having more up and down weather with snow to the north of us and snow to the south of us. Looks like there will be some on the ground by the weekend. The road in the Moose River Plains was like an ice skating rink during the week. 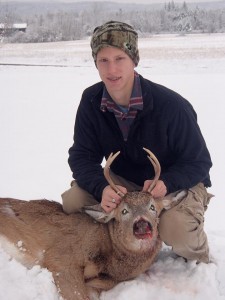 I’m just glad I didn’t have to drive it as those first two hills wouldn’t have been fun to come down. My driveway was bad enough but a little sand helped. The goldfinch liked it too as there was some grit to eat.

It’s also been a noisy week out in the woods. With sleet on top of the little snow we had it’s like walking on crackers.

The deer could hear you coming a mile away. The best you could do is sit and wait for one to come walking along.

I saw some nice buck rubs in the areas I’ve been traveling so I knew there was a buck around, even if only at night. The deer are now safe for another year, except for cars when they are crossing the highway.

I haven’t seen any bear tracks in over a week but a fella told me there were some up by Upper Brown’s Tract Pond this week.

There are still a world of beechnuts on the ground. I even saw a chipmunk collecting nuts around the house when it was minus four degrees, however I haven’t seen him around the bird feeders at all. 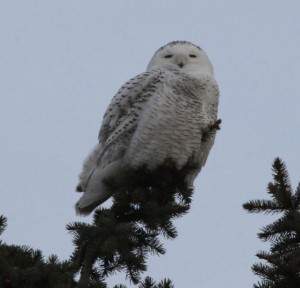 There must be a shortage of lemmings in the north country as Snowy Owls have been reported as far south as North Carolina.

We don’t get them in this area as they need open fields to hunt. You find them around airports and open farmlands.

It’s reported that the parents kick the young out of their territory which forces them to find a place to eat. So these juveniles migrate south to feed on mice and shrews.

That’s our good fortune as they are such a beautiful bird to see in the wild. There is a web site that follows these sightings. It’s http://vtecostudies.wordpress.com/2013/12/01/ghosts-from-the-artic/.

My friend Ellie George went chasing after snowy owls over the weekend. She heard one was in Keene, but when she got there she found out that it had been killed by a car.

She then traveled into Vermont and into Button Bay State Park where she saw lots of neat birds.

When she got back to the parking area she saw some birders with their binocs up so she went to see what they were looking at. There were two snowy owls perched in the treetops and she got some nice shots of them.

One appears to be a male and one a female. The females have lots of black flecking in the feathers and the males have a white chin and breast feathers.

The Old Forge Christmas Bird Count is Saturday, December 14th. It takes place all day and night—just in case someone wants to go out calling owls in the dark.

Some friends of mine once did this along the South Shore Road and got stopped by the police who asked them what they were doing. When they said they were trying to find owls the conversation ended and no tickets were issued.

You can count at your feeders and let me know what you have as any bird counts. I’ve had a couple cardinals reported this week so they may still be around for the count. There may still be some open water in the channel so ducks and geese may still be lingering there.

My grandson has hunted several times this fall at a friend’s farm down near his home in Webster. He saw several deer and even missed one with the shotgun I gave him. Last week he was out again hunting with the friend’s gun which had scope. He was in a blind and two deer were out in front of him, a doe and spike horn buck.

He was about to shoot the doe because it was bigger than the buck when a nice six-point buck walked into the field. He quickly changed his mind and put his sights onto the bigger buck.

It went down with one shot and Jake had his first deer. His friend showed him how to dress out the deer and Jake said he did it all. Great job! He called me to tell me of his deer, and I was very happy for him.

I then called my brother to tell him but he said he had already read it on Facebook. There are no surprises anymore as the smart phones are quicker than the telephone.

Birds seen on the Christmas Count, but that’s another story. See ya.