The Old Forge Ballet Company will present its annual production of The Nutcracker at the Strand Theatre on Saturday, December 7, and Artistic Director Sue Ann Lorenz-Wallace, has announced this year’s cast which includes company members who have performed for the past 20 years along with some new faces. 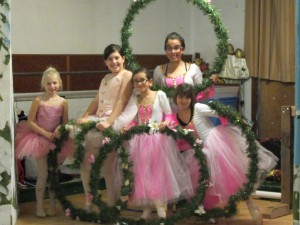 Laurie Waranis, a teacher at the ballet company, will return to her role as Frau Stahlbaum with Clint Otto returning as Herr Stahlbaum.

Portraying their daughter Clara in the matinee performance is Kerissa Dunn, with Alison Russell in the role for the evening performance.

After a two-year hiatus, Atlas Croniser is returning for the role of their son Fritz.

Jeff Dickinson will again be the comical butler and Karen Russell the parlour maid.

The Grandfather is Donald Olney and Betty Rannels will be the Grandmother.

Dancing as the mechanical dolls in Act 1 are Eileen Ponsot, Alivia Hopsicker and Kirsten Croniser and Atlas Croniser as the Toy Soldier.

Act 2 is cast by Company dancers and Act 1 children in the traditional divertissement of character dances. Nicholas Olsen and Renee Smith will perform in Spanish dance. Arabian dancers will include Katie Ludwig, David Beck Chrissy Rood Indivero and Caitlin Russell with Alison Russell, Kerissa Dunn, Katie Case and Ashley Ludwig as the Peacocks.

The performances will be on Saturday, December 7 at 2 p.m. for a narrated matinee and 7 p.m. evening performance at The Strand Theatre in Old Forge.

Pre-sale tickets are available at Naked Moose, Mountain Greenery, and the TOW Bar for $10 for adults/seniors and teens. Children under 12 are admitted free of charge.  Tickets at the door will be $15.