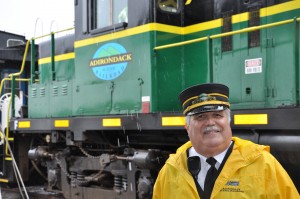 An Adirondack Scenic Railway train made its first trip to Big Moose Station in 30 years on Saturday, May 25. The train pulled out of Thendara Station carrying 191 passengers, board members and volunteer staff, many of who traveled to Thendara from Utica’s Union Station.

Train passengers were greeted by the cheering of enthusiastic townspeople and live music when they reached their Big Moose destination.

“We have been looking forward to this trip literally for years,” said Gene Falvo, Adirondack Scenic Railway board member. 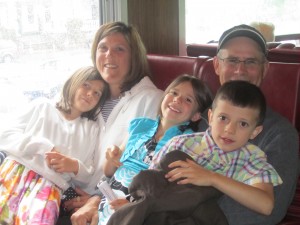 “We have people who bought tickets for this years ago, and have been waiting patiently for the track. We contacted them, and virtually all of them are here today. These are rail fans and supporters who have an interest in the history and/or the future of the railroad.” 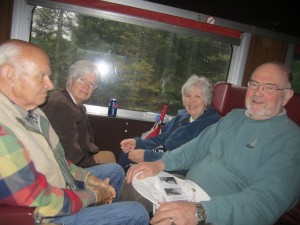 Harry Lenz, a retired NYS DOT engineer and a charter member of the Adirondack Railway Preservation Society, was among those on-board for the historic trip. He did a lot of engineering for railroads in the 1980s, he said, and was one of the original directors.

He said the Adirondack Railway is on state and national historic registers, so the train and stations are considered an historic transportation corridor and structures. This aids the railroad’s qualification for enhancement monies.

Lenz explained that this line to Big Moose is part of a bigger vision to reopen the line all the way to Lake Placid. He emphasized that it’s a proven business model, saying that all towns through which the railroad runs, profit from the package deals which bring customers to town.

They partner, for example, with a boat tour company and run a shuttle bus from the train station to restaurants and shops in Old Forge.

Train enthusiasts have been supporting the rebirth of the Adirondack Railroad since 1992.Volunteers and staff continue their efforts to fully restore the railroad.

Work which began on the Big Moose stretch of tracks in 2012 was completed recently, with 8,500 new railroad ties installed between Carter Station and Big Moose.

The railroad received Federal Transportation Enhancement monies, in the amount of $1.2 million, which were granted through New York State’s Department of Transportation (NYS DOT) and used to complete the line.

“We’re working on complete renovation of our equipment,” said Maher. “We’re working on replacing seats and windows, and we’ll be repainting exteriors this year as well. They’ll be the same historic New York Central colors with the grey exteriors and white and blue stripes.”

“We’re interested in offering an extensive ‘Rails and Trails’ program, even up to Tupper Lake, Saranac and Lake Placid. We can drop people off at trailheads and really give access to an area of the park that people don’t otherwise have access to, because we do run through land designated ‘Forever Wild’,” he added.

Claire Oehler of Old Forge was one of the many passengers who enjoyed her train experience.

“It was good to be part of this historic train ride. I’ve never been north on the train. It was fun spending time with friends, and a lot of laughs,” she said.

The train will continue to run every Saturday from July 6 to August 31and September 12 to October 19, with 9:30 a.m. departures from Union Station. The train will return to Utica at 7 p.m. From September to October, Thursday trains will also run.

Tickets for this trip are $56.50 general tickets, $54.50 for seniors 62 and older, and $46.50 for children 12 and under. Children under two are free. First class tickets are $109. Hot food items and drinks are available onboard the train. Tickets can be purchased at www.adirondack rr.com.