Eighth grade students and faculty pose for a photo holding quilts similar to those made during the Civil War Era and the flags of the north and the south. Photo by Carol Hansen.

The idea for the students to re-enact the life of Civil War soldiers was suggested by Technology teacher and Civil War buff, Steven Bradish, who also assisted with the history project.

Some of the students/soldiers wrote poetry and letters to loved ones outside a series of tents that were set up on the field as Diane Amos gave a talk on the type of clothing worn by women during the Civil War and served hardtack, a hard sugarless cookie made of flour, water and salt. 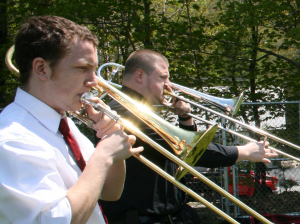 Colleagues of Greg Clark’s traveled from Albany and played tunes popular during the Civil War era, while Drill Sargeant Mark Johnston conducted marching drills and showed the students how to fill their guns with powder.

Following the hands-on project, the students participated in a baseball game, where those who live North of the school, wearing blue shirts, were teamed against those living South, wearing grey shirts.