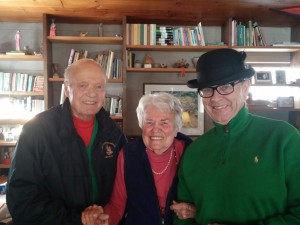 State Senator Hugh T. Farley (R, C, I – Schenectady) is a frequent participant of the Old Forge St. Patrick’s Day, and once again he joined in the festivities on Friday, March 18th.

Another event not missed by the senator is the pre-parade party hosted by local attorney Timothy Foley and his wife Patty at the Foley Law Firm on Main Street.

Senator Farley enjoys meeting with his many local constituents at the Foley office, but was disappointed to hear that fellow long-time guest Miriam Kashiwa was unable to attend this year.

Not wanting to miss an opportunity to see his friend, he and the Foleys paid her a home visit prior to the St. Patrick’s party.