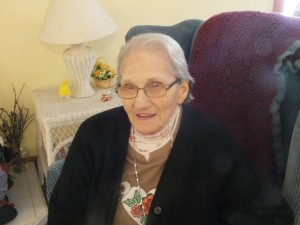 The new furnace had blown! Food from the ice box was thrown all over the room. Something was even ejected right through the wall leaving a hole. It was a mess, but thankfully they had not lost their temporary garage home.

In those days, people had ice boxes instead of refrigerators, said SHARP participant Dorothy Walker.

“Ice boxes were a nice piece of furniture,” she said. “People would have a big chunk of ice delivered to their homes, and put it in the ice box to keep food cold.”

Melvin and Dorothy Walker lived in the garage from 1948 to 1954 while they were building their own home. The garage was small, but at least it had plumbing, a kitchen sink and cupboards.

At the time of the furnace blowing up, Dorothy was pregnant with their first child. While cleaning up after the furnace, Mel and Dorothy had to move in with a neighbor.

The furnace blowing was hard to deal with, but Dorothy says one of the hardest times in her life was when her dad was killed in an auto accident in 1956.

“It was just so unexpected…an unexpected death can put a shock to your system,” she said.

His automobile was hit by a drunk driver. She says that if they had had seat belts back then her father might have lived. He was killed on the eve of Dorothy and Mel’s 10th wedding anniversary.

Dorothy met her husband, Mel, at a barn dance in 1946. The owners of the barn borrowed money to rebuild it after it burned down and held square dances every week in the new barn until they paid off the loan.

Dorothy and Mel met on June 6 and married on October 7 after dating only four months, but the union lasted 47 years.

Her husband suffered a stroke in 1984 and began another very difficult time for Dorothy because her children were grown, and she was totally on her own. Mel had had an aneurism and needed to be placed in a nursing home where he lived for 6 1/2 years before he died in 1991.

Mel had worked as a plumber, and in 1948, he became the superintendent of the Sylvan Spring Water Company. He was still the superintendent even after his stroke and moving to the nursing home, because his position was under the “grandfather clause.” If the company had let him go, they would have had to hire an engineer, which Dorothy said, “would have cost more money than the water company made.”

During early childhood, Dorothy lived on a farm in Lenox, two miles north of Perryville, NY. She had five siblings: two sisters and three brothers, one of whom died at six months old when Dorothy was three years old.

Dorothy says, “He was a blue baby.” The blue baby syndrome is when blood comes from both ventricles instead of just one and prevents the full flow of blood to the lungs.

When Dorothy was just five years old, she lost her mother to cancer. Her father got remarried and had six more children, so she grew up in a big family.

Dorothy recalls that she and all of the children would go out every day with to wait for the train to come by their house. She said they would even trudge through snow up to their hips, just to be there as the train passed.

The conductor of the train would throw out candy and gum and magazines that were all wrapped up so it would all stay together. After dark, one of the children would go out with a lantern to wait for the evening train to receive a daily paper.

Dorothy said she especially looked forward to the paper because she liked to read the comics. She liked the comic strips Maggie and Jiggs and Blondie. But her favorite comic was The Phantom, a continuing story that she wanted to read every night so she could keep up.

Dorothy’s fondest childhood memories are of Sundays while living on her family’s farm in Canastota, NY. Aunts and uncles would often visit bringing a lot of children to play outside with. If they didn’t have company, her family would go berry picking and then can their profits.

“The house is still there; the barns have been made into apartments.” Dorothy said.

When Dorothy was thirteen or fourteen, she was hired by a family to help with their two children.

The father of the family had to be away from them for a while. He was part of a group of men working on moving an old cemetery to make room for Griffiss Air Force base in Rome, NY.

She said the men had to be quarantined because the cemetery was very old, so they could not go home until the whole project was complete.

If YOU are a local senior, you are invited to to join us. SHARP is a free program offered to all independent senior citizens from Woodgate to Raquette Lake. We meet at Niccolls Memorial Church in Old Forge from 10 a.m. to 2 p.m. every Wednesday. Lunch during our regular Wednesday sessions is provided by the Community Health & Wellness Fund (formerly the Town of Webb Health Center Fund.)

For more information, call or text (315) 225-7553, or email activitiescoordinator4seniors@yahoo.com.