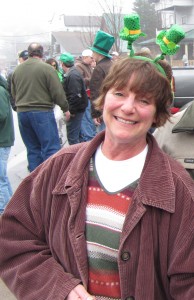 Plans for the trek began January 5 of this year following a terminal cancer diagnosis.

Her response to a doctor’s recommendation for treatment was, “No thank you.”

She scoffed at his suggestion that she had one to two months left without it… there were still a few things she had to do. 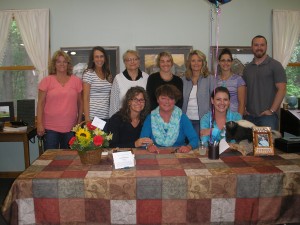 Friends and family of Jan Knudsen, aka Mrs. Lucky, joined her at the Woodgate Library on Saturday, June 27 for a book signing event celebrating the recent release of her book, Just My Luck. Back row: Holly LeDuc, Sara Ludecke, Linda D’Aprile, Annie Gilbert, Carol Kelley, Amanda Hoskins, and Alex Hollings. Seated are Lisa D’Aprile, Jan Knudsen, and Jamie Hollings. The book is $20 and available online at: 2ndhandhero.com. Photo by Marianne Christy

So she put her faith in the divine travel agent and together they mapped out the trip that ultimately lasted 11 months.

Jan publicly laid out her story in her column, “Just Call Me Mrs. Lucky,” and in the following months wrote about her living-with-cancer experiences.

Among them was a joy-filled spring RV roadtrip to Georgia with husband Rocky and their ever-faithful dog, Buck.

The June release of her book, Just My Luck, was a life-long dream fulfilled through the efforts of her son-in-law Alex.

The book is a chronicle of the scores of columns she wrote for The Weekly Adirondack where she took on such subjects as social media, cable companies, driveway pee-ers, Walmart, north-country living, car dealers, etiquette, modern parenting, etc.

However her most frequent subject was Rocky, who she good-naturedly ribbed for his “man habits.”

As a writer, it’s not easy to poke fun and not come off as being mean-spirited.

But she managed to nail it…her love and respect of Rocky always came through.

Her ability to relate with readers was most evident with the upwards of 400 cards and letters and countless phone calls and emails she received following her announcement.

Because well-wishers didn’t know her last name many of the envelopes were addressed simply, Mrs. Lucky, or Jan from Woodgate, Woodgate, NY 13494. Mrs. Knudsen was overwhelmed and humbled by the outpouring of love and concern.

But not everyone was a fan of her work; gleefully, she would be the first to tell you.

One person made a point to tell her so, again and again…and again.

They even called our office multiple times demanding that we banish her from our pages.

During one rant they shouted with great disdain, “Just look at that face!!!!”

As I gazed at the picture on her column header, all wide-smiled and happy, I politely replied, “If you don’t like it, turn the page.” Haven’t heard a word since.

For the past couple months Jan’s daughter Jamie took up residence at Jan and Rocky’s.

Alex was there whenever possible, especially weekends.

When he left on Monday to return to Connecticut for work, he was halfway home before he realized he didn’t have his laptop.

He returned to Woodgate, then decided to stay another day.

That night, Jamie gave Jan her meds in bed, said goodnight and told her she loved her.

She passed away peacefully in the night.

Jan’s friends believe she had something to do with Alex “forgetting” his computer. It was in her plan that she end her journey with those she loved the  most.

“She left this world in a perfectly orchestrated way,” Alex said.