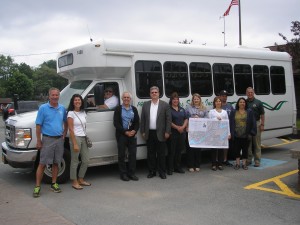 Officials of various agencies who helped make the Old Forge/Thendara Community Shuttle a reality were in Old Forge on Thursday, June 18 for a tour of the routes that will be traveled by three shuttles throughout the summer.

The service commenced the same day and will continue through September 6.

The shuttle service is made possible by primary sponsors Herkimer County, the Town of Webb and the Central Adirondack Association.

Herkimer County Legislator Patrick Russell worked with CAP-21 in facilitating the process with Herkimer-Oneida County Transportation Study (HOCTS), on behalf of the Town of Webb, in gaining grant funding.

“Pat is the lynch pin that held this together. The shuttle would not have happened without him…he got it to legislative vote just in the nick of time,” Farmer said.

Dana Crisino, Transportation Manager/Director of HOCTS, said the financial community support of the service is unprecedented and unparalleled throughout the state.

The shuttle will run from Thursday through Sunday. It will run from the Thendara Rail Station/Van Auken’s Inne to Hollister’s Trading Post with multiple stops in between. Shuttle stops are currently marked along the route and maps can be picked up at the TOW Visitor Information Center and area businesses.