The trip west to Colorado went well as we only hit a few rain showers just east of Chicago. As we approached Denver the mountains were covered with snow so we knew when we went over the divide we would see some more.

The road was clear the whole way and several of the ski centers were in operation.

This morning (10/19) we had a dusting of snow, but temperatures went up in the fifties and melted most of it. 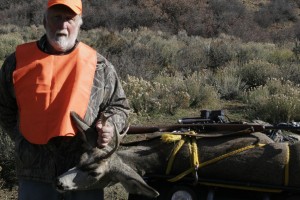 We are pretty well settled into our little cabin and we have seen several mule deer around the yard.

We traveled up to our hunting area this morning to see if the four- wheeler was going to run and checked out the combination on the lock before tomorrow’s opening day.

We checked some of the area and saw a couple elk and four mule deer.

On the way out we saw a few more elk wandering around in the daytime.

There seems to be lots of wild food out here also so the animals and birds should do well here before winter.

I’ve seen several birds feeding on the berries and pine nuts. Red-shafted flickers, pinion jays, stellar jays, western bluebirds, robins, Oregon juncos, ravens, magpies and other birds are around, along with Canada geese, several different ducks and even some sandhill and whooping cranes. 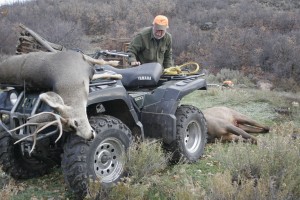 Brother Bob with my mule deer and elk in tow.

There were some beautiful colors on the trip out and the yellow aspens in the snow were neat to see.

As we came down Glenwood Canyon the oaks were bright red, which is something I hadn’t seen before.

After seeing that, we thought the leaves would still be on the trees where we hunt.

But at seven and eight thousand feet the trees are bare and with a little snow the animals aren’t able to hide.

A couple of notes about things at home. The Old Forge Garden Club tries to keep Point Park spruced up during all seasons.

A couple of weeks ago they put some corn stalks and pumpkins at the park for the fall.

My wife came home from the library and said the park looked really nice.

A couple days later she said the pumpkins were gone. I told her that maybe the deer got hungry.

But upon inspection there was nothing left of the pumpkins at the scene, however what was left of them were found along North Street.

Deer haven’t been carrying food around, but some vandals who stole the pumpkins sure did the job.

If anyone knows the culprits they could report them to the local police as the Garden Club paid money from the treasury to buy the pumpkins to keep the park looking nice.

The first day of the season was probably one of the best days of hunting we’ve ever had here.

To start the day out right, the four-wheeler wouldn’t start. This may have been a good thing as Brother Bob had to walk to his stand.

On the way in he walked up on three nice mule deer bucks and shot a 3×3.

A few minutes later Bob Miskanin’s rifle cracked and he called on the radio that he had gotten his first mule deer buck.

They got the four-wheeler going and went up the mountain to pick up both animals.

After a few pictures they loaded them in the truck and went off to the meat packing plant in Silt as I continued to hunt.

Before they left a nice 3×3 mule deer ran down the hill towards me and shot it. I cleaned it up and dragged it up to our interior road. After that I went up the pond site and sat on watch until late afternoon.

The other fellas had returned and went on watch. We had all used our mule deer licenses so now it was all elk or nothing.

About four in the afternoon a cow elk came down the hill about two hundred yards from me and I shot her.

I looked up the hill where she came from and there were three other elk, a come and calf and a legal bull.

I passed on that shot as I knew I had more than enough work to do before dark.

I got her taken care of and waited for a pick up, but no one came.

They hadn’t heard any of my transmissions on the radio so they were sitting in the truck waiting for me when I came out a little after dark.

A bear had moved the elk carcass about five feet.

This elk weighed about 800 pounds so this was no small bear. Luckily it only cleaned up the gut pile and didn’t work on the carcass.

Even with the help of the four-wheeler Brother Bob and I had a little tussle to get this big animal out of the sage brush.

When we got to the mule deer we put him right on the front where I had been sitting and out they went to the truck.

Putting an 800-pound animal in the back of a pickup is no small task. We found an old plank and slid her up and in.

Never a dull moment in the Colorado woods, but that’s another story. See ya.