Kristen and Travis Fata, new owners of the Knotty Pine Restaurant on Route 28 in Thendara, will host an Open House on Tuesday, October 15 from 5 to 10 p.m. 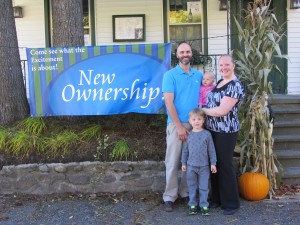 The couple, who took ownership of the landmark restaurant in June, said they look forward to taking some time to visit with the local community in a casual atmosphere following the busy summer and post-Columbus Day holiday weekend.

“We have gotten to meet a lot of new folks since we opened and we appreciate their support. We look forward to seeing them and meeting others, who like ourselves, can take advantage of the quieter time of year,” Kristen said.

Kristen, who has a background in the field of hospitality, and Travis, who grew up in the restaurant business, moved to the area from Binghamton in pursuit of their dream of owning their own restaurant.

They were drawn to Old Forge due to their love of the Central Adirondacks and their goal of running a quality establishment.

Kristen said she had vacationed in the area since she was a baby, taking family camping trips to Limekiln Lake and Golden Beach. Later the family rented cottages on Fourth Lake.

As parents of a four-and-a-half year-old son, Maximus, and six-month-old daughter, Lillian, the quality of the local school system also figured big into their decision to invest in the area, Kristen said.