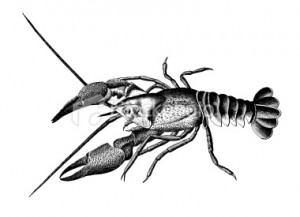 Somewhere near the middle of the summer of 1978 I began to tire of all the things I usually liked to do. I had spent a lot of time hopping the rocks to Fawn Lake, fishing, and taking the canoe out. I caught frogs and hiked and biked every trail.

So what I really needed was a good adventure to mix things up.

My dog Mutt seemed to be in a similar state of mind as we sat in the shade of the maple tree near our house, watching tiny ants make their way among the clumps of grass.

All of a sudden the silence was broken by my friend Eddie who came barreling into the yard on his bike.

He skidded to a stop and dropped the bike in a single motion. He came over and flopped down next to us, asking what we were up to.

“Well, me and Mutt were thinking about an adventure. What do ya think?” I said.

We sat a little bit longer trying  to get those ants to crawl up small maple twigs that we had poked in front of them. Finally Eddie said, “How ‘bout going crayfishin’?”

Crayfishing had the components of a pretty good adventure as it involved getting wet and hiking a streambed.

A contest to see who could get the biggest and the most crayfish was also added to make the hunt more interesting.

It didn’t take us long to grab some buckets and decide where we would go.

I wanted to try the lazy creek that flowed down by the King Camp, but Eddie suggested we try the outlet of the lake.

“We’ve never crayfished there before. I bet we can find some pretty big ones there,” he said.

We looped our bucket handles over our handlebars and pedaled through the DEC Campground on Limekiln Lake making tracks for the far end of the lake. Mutt ran alongside us as we made our way down to the old leach field.

When we hit the small pathway to the outlet creek Mutt dove over the bank and submerged her whole body into a large pool and lapped at the clear water. Eddie and I grabbed our buckets and headed into the creek in search of crayfish.

I waded shin-deep into the very cold water, poking at the bottom of each stone with my fingertip.

I could smell that the raspberries growing along the edge were not far from ripening.

I guess we spent about three hours there in the creek. I tried to keep one eye on Eddie to see how he was doing, and the other on the bottom of the creek looking for small maroon crayfish that might be creeping backwards under the rocks.

I wasn’t having much luck finding a big one but I did collect 23 regular-sized critters in my bucket.

Eddie came down to my hunting spot. He said he was about done, claiming he had lost all feeling in his feet from standing in the freezing water.

Just as I answered his question, Eddie pulled the rim of his bucket down so I could peek in. And man oh man, it was just crawling with them. I asked him how many he thought he had.

He said he stopped counting at 55 because his bucket fell in the creek and a couple might have gotten away. But he thought he got about twenty more since then.

“Any whales in that bunch?” I asked.

”Naw, I guess the big ones get picked by something else cuz it’s so open in here,” Eddie said.

Picking crayfish turned out to be a pretty good adventure.

We found a spot down by the dam to set them free. It was funny to see so many of them trying to find cover under the rocks at the same time.

We spread ourselves out on an open rock and watched them for almost an hour before they all seemed to disappear.