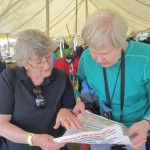 Jo Holahan and Connee Wilson of Cazenovia came to Paddlefest for classes- Paddle Like a Girl, Kayaking 101 and Easy Paddling for All Skill Levels

Luy Lindeyer and Skip Taylor pose with a line of Swift kayaks. Photos by Wende Carr

The manufacturer reps love coming to this show, according to Nemjo, because of the setting and the fact that it’s one of the few where folks can test paddle the boats.

“They go to a lot of shows in auditoriums in big cities, but this is where paddle sports happen,” Nemjo said. “They love coming here.”

Many of the folks who come to work at Paddlefest go out for paddles themselves in the evenings.

Customers at Paddlefest came from as far away as Maine, Canada and England. END_OF_DOCUMENT_TOKEN_TO_BE_REPLACED

Author and mentor/ coach David Hazard is offering two free workshops in May and June, in conjunction with View.

“My goal is to build a sustainable writing program through View,” Hazard said. “I’ll start out by covering some of the basic forms people are writing in generally… narrative writing techniques for use in fiction and nonfiction, historical narratives, memoirs, etc. We’ll also cover basic essay writing for self-help and other books. We’ll get into writing classes for playwriting, and eventually poetry.”

“We want to create a program which is accessible to the everyday writer and which brings with it high standards,” said Hazard whose resume boasts almost 35 years in publishing.

Hazard has personal aspirations to acquire a lakefront property and create a writing habitat.  He sees people coming to a bed and breakfast there, to work with him as a professional writing coach for a week or two at a time.

One such workshop is already scheduled for September 8-13, 2013 in the Adirondacks. To read more about it, and/or to register, go to www.itsyourlifebethere.com.

Hazard is currently working on a series of nature essays set in the High Peaks of the Adirondacks.  He’s also writing a book on developing one’s creative consciousness. END_OF_DOCUMENT_TOKEN_TO_BE_REPLACED 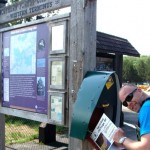 Heaps decided while in Afghanistan that he needed to take time away when he returned to Britain after his stint in the Near East. An experienced paddler, he started out looking at Canadian canoe routes but discovered the NFCT online. END_OF_DOCUMENT_TOKEN_TO_BE_REPLACED 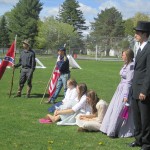 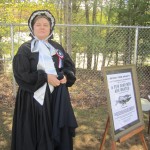 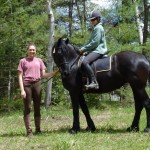 Confederate soldiers had access to cornmeal, which they’d cook in the grease of meat they’d already cooked. Students learned from Derby’s character that five or six soldiers would share the cost of a frying pan, a valuable commodity at that time, and taking turns carrying it. END_OF_DOCUMENT_TOKEN_TO_BE_REPLACED

A memorial service will be held for Ceil Buckley on Saturday, June 1 at Niccolls Memorial Church. The service will begin at 11 a.m. with Reverend Lawrence Bartel officiating.

A dedication ceremony will follow immediately afterward at the Old Forge Library.

Initially, they met in the Kashiwas’ home. Hank Kashiwa had ingeniously rigged a quilt frame to be lifted by pulley to the ceiling, so it would be out of the way when not in use.

Quilts made by the women’s group have been raffled annually to help pay The Old Forge Arts Center’s heating bill.

The group has added Big Moose Chapel, other organizations and most recently, The Strand, to the list of benefactors who receive quilts for the purpose of fund-raising raffles.

Buckley’s daughter Betty Rannels proposed creation of a cabinet to house Ceil’s books and thimble collection at the library.

The library will, with Buckley’s estate, co-fund the cabinet.

Tetreault and Schmid are donating their labor to the cause, for which Rannels, library staff and board members are deeply appreciative.

Dedication of the cabinet will be held immediately following Ceil Buckley’s memorial service. Light refreshments will be served at the dedication.

The Central Adirondack Association (CAA) is inviting all members and non-members to its annual Spring Fling social gathering. The event will take place on Thursday, June 6, from 6 p.m. at the Big Moose Inn, hosted by owners Mark and Susan Mayer.

Hot and cold appetizers will be served for $10 per person, and a cash bar will be open.

“It’s an annual CAA event, an opportunity for people to come together before the busy summer season,” said Gary Staab, CAA membership chairman. “It’s a great time to network with other businesses and find out about events we sponsor, as well as the many contributions we make to community organizations who request donations.”

Idea sharing is something that Staab, as a long-term local business owner, has found useful in CAA meetings.  END_OF_DOCUMENT_TOKEN_TO_BE_REPLACED 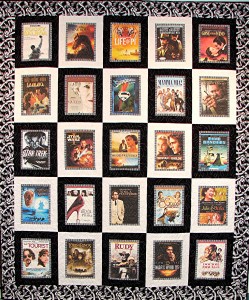 The Strand quilt by The Pointed Pine Quilters

The Pointed Pine Quilters have produced and donated a quilt to be raffled for the benefit of the Strand Theatre’s “Go Digital or Go Dark” fund, which will help purchase needed digital projectors for the Strand’s four theaters.

Louise Watson, a Thendara quilter, brought the idea of showing support for The Strand to the quilters’ group, which agreed to create a quilt.

Claire Oehler came up with the idea of enlarging DVD images to 150%, which proved a perfect quilt square size.

Oehler chose classic films such as Casablanca and Gone with the Wind, and the contemporary films, Mama Mia, Lord of the Rings, Life of Pi and Star Wars. She enlarged and transferred twenty-five images onto fabric, then bordered each with black and white.

Watson and Oehler searched to find a black and white print fabric with an appropriate design for the quilt edges. The design is complemented by a print depicting uncoiled spools of film. END_OF_DOCUMENT_TOKEN_TO_BE_REPLACED