A group of Rochester travelers headed for Inlet experienced car trouble when they reached Old Forge about 9:30 p.m. on Friday, October 3rd. 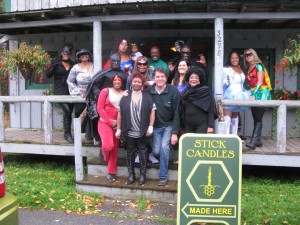 With service stations closed, the driver sought assistance at the fully lit Stick Candle shop on Route 28, where owner Doug Collum was putting in some late hours.

Collum checked out the situation and found that the lug nuts on the rear driver’s side wheel were loose. He jacked up the car and tightened up the wheel lugs, and following a hearty thanks, the group, who Collum only knew as Dwight, Summer, Sky and Lonice, were safely off to their destination.

But the story didn’t end there.

The next day they, and a bunch of their friends, paid a surprise thank-you visit to Collum…dressed in Super Hero attire.

It turned out that Dwight and his wife Summer were the organizers of an annual costume-themed weekend in Inlet. Last year’s theme was Cowboys and Indians, and the previous year, Cops and Robbers, they said.

“It was totally nutty and one of the most thrilling surprises of my life,” Collum said.

Like all small business owners in the area, Doug Collum sees hundreds of summer customers pass through the doors of his Old Forge shop where he manufactures and sells his unique beeswax stick-shaped candles.

Two summers ago a few admirers of his work purchased candles, telling Collum they were for their personal friend, media mogul and entrepreneur Martha Stewart.

Collum was flattered by the thought but skeptical that Stewart would actually ever receive the candles. 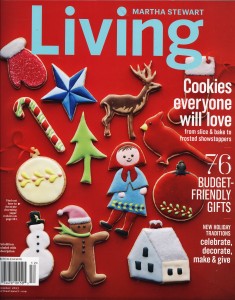 But this summer, the customers returned to say that they had gifted the candles to Stewart who was delighted with them.

They also hinted that he may be getting contacted by Martha Stewart Living magazine to have his stick candles featured in an upcoming issue.

Collum again questioned the validity of the conversation, but to his surprise, he received phone calls within weeks.

END_OF_DOCUMENT_TOKEN_TO_BE_REPLACED

Driving north along Route 28, just outside the village of Old Forge, sits a small blue building, which up until last summer sat lonely and vacant.

That was until Doug Collum of Syracuse and Old Forge, ignited some life into it and began making his signature product, Stick Candles. 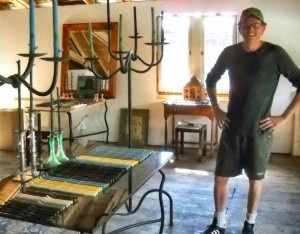 Doug’s Stick Candles are handmade beeswax candles in the shapes of sticks that have been cast from Maple, Cedar, Hickory, Ash, and Bamboo trees.

Doug said the idea was inspired by his mother’s quest to find similar candles she had received as a gift many years prior.

“My mother had been given a pair of stick-shaped candles for some occasion, which she kept for a really long time because she loved them so much. Eventually she did burn them, but she forgot who had given them to her and where they had been purchased,” Collum said.

“So, one year I asked her what she wanted for Christmas, and after she explained her situation to me, I told her that it would be no problem to find them.” END_OF_DOCUMENT_TOKEN_TO_BE_REPLACED