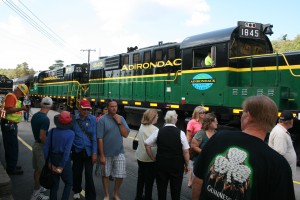 Passengers waiting to climb on board for a ride to Otter Lake on Saturday.

The Adirondack Scenic Railroad commemorated its 20th year of service to the area with a series of rail-themed events on Saturday and Sunday, September 1 and 2 at Thendara Station.

Don Chaurdruc, Adirondack Railroad road foreman and coordinator of the event, said he was overwhelmed by the number of people who turned out to enjoy the caboose rides, tours of a private rail car, excursions, historic slideshow presentations and other railroad-related activities.

“The turnout was so great that I don’t know where to start. People were lined up both days to experience the locomotive stimulator, and the caboose rides sold out both days as well. We estimate that about 1,400 people came out for the celebration. We are extremely pleased,” Chaurdruc said. 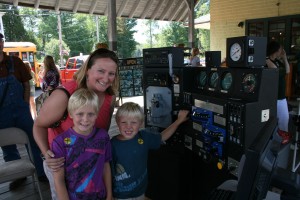 At right, Gavin Chapman, 5, of Cortland tries out the controls of the training simulator on exhibit at Thendara Train Station, as his brother Gage, 9, waits his turn. Also in the photo is his aunt, Kelly Chapman. Photo by Carol Hansen.

Of that estimated crowd, 500 took advantage of the bus shuttle service into Old Forge to tour the village, shop and eat, he added.

The slideshow at Thendara Town Hall, featuring the Adirondack division of the railroad from the 1930’s to the present, drew so many railroad and local history buffs that they had to run out and borrow more chairs for seating, according to Chaurdruc.

Among the passengers on one of the rail trips was a group of representatives from the Adirondack North Country Association (ANCA) who turned out in support of the railroad’s current expansion effort of laying 12 miles of new ties between Carter Station and Big Moose. 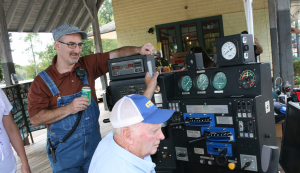 Dennis Brady of Clinton tries out the controls on the training simulator as he watches the monitor. Instructing him is Adirondack Scenic Railroad engineer, Bill Kaufman of Ogdensburg. Photo by Carol Hansen.

“Due to the expansion, people will be able to reach Big Moose by rail by mid-October. The extension of tracks is great for tourism because the train will now be able to take people back and forth to bike, fish, kayak, and hike who would otherwise be unable to get up there,” said Dick Bird, vice-president of ANCA.

Chaudruc said that what struck him most about the weekend was not only the outpouring of enthusiasm by “railfans,” but also the number of railroad curiosity seekers.

“I believe we really opened the eyes of a lot of people who have never been on a train before. That’s what we’re trying to do here,” Chaudruc said.

And there will be plenty of upcoming opportunites for rail veterans and newbies alike to take advantage of.

Weekend fall foliage tours have begun and special Pumpkin Train trips are scheduled for October 13, 14, 20 and 21.

The Adirondack Scenic Railroad also takes part in the annual Adirondack Christmas on Main Street event, bringing trainloads of folks to the area from Utica’s Union Station on Friday and Saturday of Thanksgiving weekend.

This year’s event has been extended into the next weekend as well and train transportation will be available on Saturday, December 1.

More information can be found at the website: www.adirondackrr.com.

The Adirondack Scenic Railroad’s Pumpkin Train on Saturday and Sunday, October 15 and 16 drew crowds of children and parents in spite of periods of rain on both days. 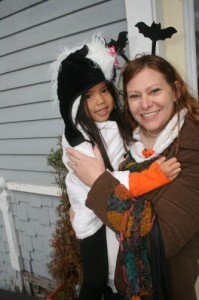 Grace Muldoon, age 5, of Rochester won first prize for her skunk costume in the Halloween contest at Carter Station. She is shown here with her mother at Thendara Town Hall's haunted house. Photo by Carol Hansen

The Pumpkin Trains departed from Thendara Station, then traveled the rails to Carter Station where the children picked out a pumpkin at Wally’s Pumpkin Patch and took part in a Costume Contest.

After returning to Thendara Station they crossed the road to the haunted Thendara Town Hall, where spooks surprised them in every corner of the dark and misty hall. 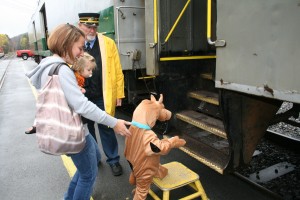 Holly Armendola with costumed daughters Autumn, age 1, and Caitlyn, age 3, as they board the Pumpkin Train from Thendara Station on Saturday. Photo by Carol Hansen.

Before leaving the hall everyone was treated to apple cider and Halloween goodies.

The Pumpkin Train to Carter Station will run again on Saturday and Sunday, October 22 and 23, at 10 a.m., 12:30 p.m. and 3 p.m. Each run will conclude with a visit to the haunted Thendara Town Hall.

Linda Ellison, operations manager at the Adirondack Scenic Railroad in Thendara, reported that the railroad had a good summer—and so far, a good fall—with plenty of passengers riding the rails from Utica Station or enjoying one of their many scenic specialty trips.

She said the “Paddle Down the Moose River” trips held in partnership with Tickner’s Moose River Canoes in the summer and fall, have been a top ticket seller.

“We’ve been doing it for years, and it’s one of our strongest train trips. Where else can you canoe down the river and come back by train?” Ellison said.

“We start getting phone calls in the winter for reservations for the canoe and kayak trips,” she added.

The Fall Foliage trips always draw a lot of passengers, she said, with three trips daily on Wednesday through Sunday.

Al Heywood of Remsen, an Adirondack Scenic Railroad board member who also serves as conductor for the Utica and Thendara runs, agreed that the season is going well. END_OF_DOCUMENT_TOKEN_TO_BE_REPLACED