The Town of Webb Board passed a resolution at the monthly Board meeting on Tuesday, September 13, acknowledging the receipt of the completed audit of the 2010 financial records for the Town of Webb.

The motion was presented by Town Supervisor Robert Moore and was made a motion by Councilwoman Russell and was seconded by Councilman Ross. END_OF_DOCUMENT_TOKEN_TO_BE_REPLACED 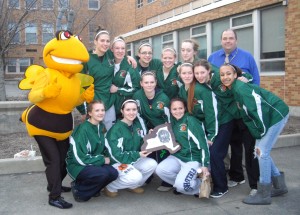 “No team at Harpursville had ever gone that far, so it was a big honor for our girls’ team,” he said. END_OF_DOCUMENT_TOKEN_TO_BE_REPLACED

McCauley Mountain Committee liaison member, Council-woman Kate Russell, updated the Town of Webb Board on the most recent improvement activities planned for the McCauley ski chalet, at the board’s monthly meeting on Tuesday, September 13.

Russell said this initial phase will be limited only to modifications that would improve the existing structure with no plans to expand or change the structure of the building.

The committee has met once a month since June, according to Russell.

The Postal Regulatory Commission has informed the United States Postal Service (USPS) that the USPS must provide its administrative record of closing proceedings to the commission before it can open formal appeal proceedings relating to the Woodgate Post Office.

The USPS was notified on Tuesday, September 13.

The notification was prompted by the commission’s receipt of a petition from the Woodgate Citizens Committee, which included signatures from community members and others opposed to the Postal Service’s planned closing of the Woodgate Post Office.

An appeal proceeding, conducted by the commission, under the direction of its secretary, Shoshanna M. Grove, will give the Woodgate Post Office a stay of closure against the USPS for 120 days.

During that time hearings will be conducted concerning the proposed closure. END_OF_DOCUMENT_TOKEN_TO_BE_REPLACED

Site clearing work has started for the Town of Inlet’s new Youth Commission building, with the Inlet Highway Department removing trees and soil for the foundation work to begin.

The location is at behind the Town Hall at the edge of Arrowhead Park.

The planned building, designed by Wolf Enginnering, will be 24 x 24 feet with the second story to include a porch on two sides.

The work will be done by the Town and submitted towards the Local Waterfront Revitalization Grant, according to Town Clerk Patty Wittmeyer

There are important changes to the HEAP program this year, and a requirement for a full application and documentation of all income with proof.

The total amount of funding has been severely reduced, and HEAP benefits have been reduced for the 2011-2012 year. END_OF_DOCUMENT_TOKEN_TO_BE_REPLACED