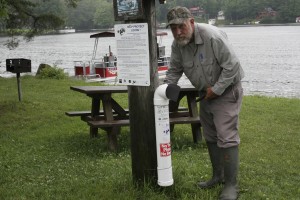 A fishing line recycling container was recently installed on the shore of Fulton Chain of Lakes to encourage the proper disposal of fishing line and hopefully save some Loons and other wildlife from injury or death.

It is located at the Fourth Lake Alger Island State Camp-ground Boat Launch.

The canister, installed by Gary Lee of Inlet, is the first in this area and part of the Fishing Line Recycling Program sponsored by Biodiversity Research Institute’s Adirondack Center for Loon Conservation. END_OF_DOCUMENT_TOKEN_TO_BE_REPLACED 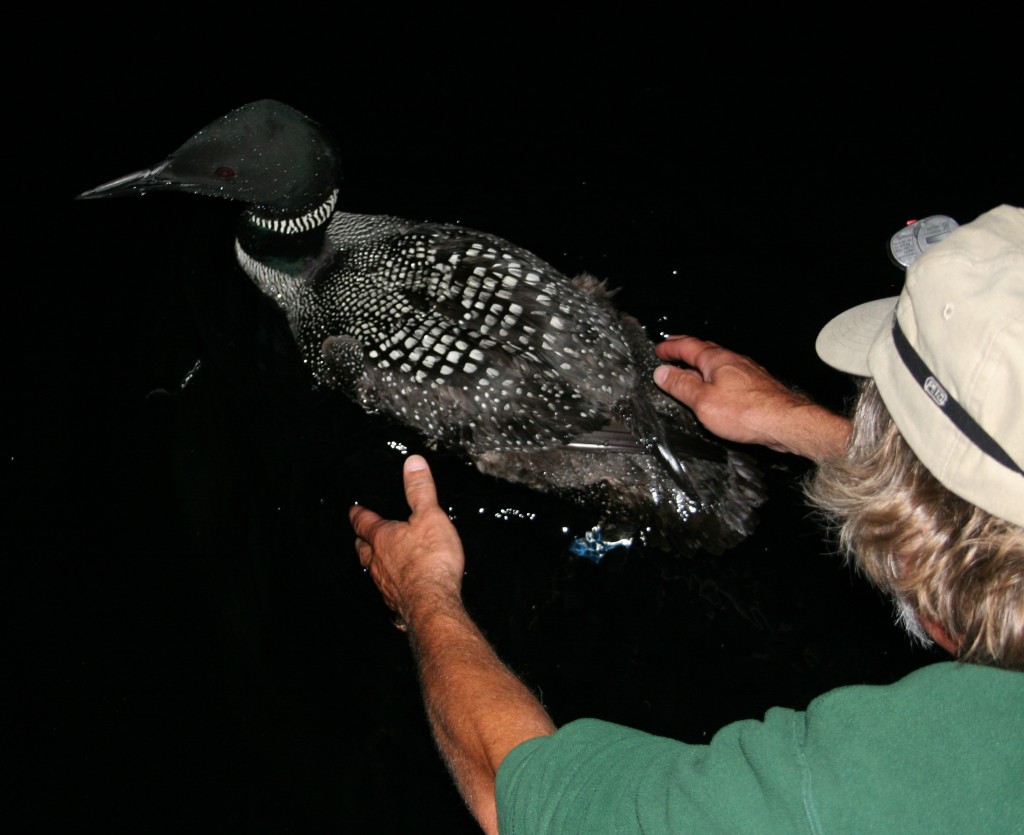 A few people got some rain this week but it was very spotty. Just a few rain drops hit our windshield on our way to Old Forge Wednesday night (8/3) to band some Loons.

I saw a few along the street that night that could have been banded also. You just never know what you’re going to see in your travels.

I have seen so many unusual things that it doesn’t even phase me anymore.

The Moose at Helldiver Pond has been a no-show for most of this week. I didn’t see any tracks in the road so he must have found another pond full of lilies to eat from.

Karen and I took a trip to the Cedar River Flow last week which was abundant with vegetation.

Karen commented that the Moose could eat there all summer and still not make a dent in the plants that were growing there.

This is one of the prettiest places to take photographs. No matter which way you look you see water surrounded by mountains.

You can see the Fire Towers on Pillsbury and Wakely Mountains from the Flow.

The reeds that grow at the west end make for neat sunrise and sunset photos.

Every time I’ve been there this summer it has been picture perfect with white puffy clouds set in a deep blue sky. This makes for neat END_OF_DOCUMENT_TOKEN_TO_BE_REPLACED

There was not much rain this past week, if any at all. I only had a couple sprinkles fall on me one day so it’s getting pretty dry.

I saw where a couple of campers had built fires right on the duff and left them burning when they departed.

I put water on them with my lunch bucket so they didn’t burn into the ground and become a fire a week later.

Old habits never die. I can smell a duff fire a mile away when the wind is blowing END_OF_DOCUMENT_TOKEN_TO_BE_REPLACED

Lot’s of Loon-y activity on lakes throughout the region

We had some sunny days last week but then we got blasted with a deluge of rain just before the weekend and again on Saturday.

I had a lady by the name of Linda go with me as I checked my Loons on Friday. We had one great day.

We started out on Limekiln Lake and as we went over near the Loon nest site the pair was right out front with a chick in tow.

I told Linda it looked like there might be another under the wing of one of the birds. I collected the eggshells from the nest and the birds had moved off about another hundred feet.

We put up our binoculars and there were two little balls of black fluff between the adults.

The female was banded at Mitchell Pond in 1998 and her mate was banded in 2002 on Limekiln.

They had a beautiful bowl-shaped shoreline nest. This is the second time they had nested on hard shore (not an island or bog) and pulled off chicks both times. They are lucky Loons, I guess.

The one nested at Nick’s Lake is on hard shore. Let’s hope they are as lucky.

Then we traveled to Number Four and put in at Eagle Falls Dam. While going up the Big Moose Road we saw two families of Turkeys and a fluffed up Ruffed Grouse.

As we went up Lower Beaver Lake, above the dam we found the female of this pair of Loons.

We first saw her preening, then found her sleeping off the nest.

We saw her bands and found she had been banded on Beaver Lake in 1999. We motored past the nest site on one of the larger islands and her mate was in the hang-over position on the nest.

It’s amazing how they look half white on the water, but when they are on the nest they seem to hide all of their white feathers and only black shows.

If you put a Loon off the nest as you are going along the shoreline with a kayak or canoe just back off and get out of the area and they will get back on the nest.

Oftentimes you won’t know that they have gotten off the nest but some birds will wing-row or Penguin-walk when they get off the nest.

Don’t hang around a nest site as the eggs might get chilled on cool or rainy days or over-heated on sunny days.

This is especially true during the last week of incubation (27 or 28 days) when the chick is filling most of the eggshell.

We then traveled to Beaver Lake and saw the pair with two chicks that had hatched a week ago. They seemed upset out on the lake but we couldn’t see what was bothering them.

There is a Bald Eagle hanging around this area that took the chicks from the other pair a couple years ago. It dove on this pair while they were on the nest a couple times this year.

Those darn Bald Eagles. You love to see them, but not diving after Loons babies.

Francis Lake was our last stop for the day and a big thunderstorm was booming just south of us. We had been in sunshine most of the day but it looked like this one might get us.

One of the Loons was fishing right off the landing and the other one was partway up the lake. I had looked at the nest site from shore last week in another thunderstorm and it looked like the nest had been broken up by some predator.

As we approached the second bird, he wing-rowed right up to us from about two hundred feet away, then dove under the canoe and came up penguin-walking out the other side.

I told her there was a chick or two in the waves around us, and sure enough Linda saw a small black head about one hundred feet away.

We went over to the nest site by the outlet and instead of the eggs being eaten they had indeed hatched.

The adults take some of the nest material and try to cover the eggshell fragments in the nest. It’s just something they do.

I collected the eggshells from the nest which was surrounded by Rose Pegonias.

In fact all the little bog islands around there were also covered with these beautiful pink flowers, some with double blooms.

We went back out on the main lake and saw the pair over on the far side by the shoreline and they had one chick in tow.

They must have lost one chick during the week or had it tucked under a wing somewhere.

The storm was pressing closer now so we got off the lake and loaded the truck just before the rains came.

Some orchids are just a blooming, but that’s another story.