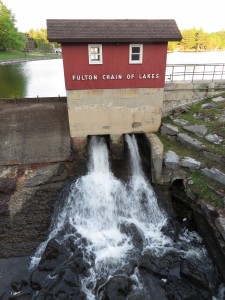 The dam at the Old Forge Pond outlet releasing four cubic feet of water per second during the current season of low water.

Many visitors and seasonal residents looking to spend the Memorial Day weekend boating on the Fulton Chain of Lakes found themselves dismayed at water levels that were more than a foot below normal for this time of year.

“Having traveled 2,500 miles to enjoy our summer at camp in Old Forge was I ever surprised to find nothing under my dock on the Channel but mud,” David Lemire wrote in an email to The Weekly Adirondack.

Lemire said he had been following the Old Forge winter while at his home in Scottsdale, AZ.  END_OF_DOCUMENT_TOKEN_TO_BE_REPLACED

Efforts to control Japanese Knotweed in the Adirondacks continue to make great strides. On June 29th, fourteen people met in Inlet to discuss plans for 2014.

The Regional Inlet Invasive Plant Program (RIIPP), which started in 2008, has expanded treatment areas each year since, with a long-term goal of eradicating Japanese Knotweed throughout the Adirondacks.    END_OF_DOCUMENT_TOKEN_TO_BE_REPLACED

The Town of Webb Historical Assoc-iation will sponsor a fund-raising Historical Boat Tour of the Fulton Chain of Lakes on Saturday, September 17.

Participants will meet at the Old Forge Navigation Dock at 1 p.m. and enjoy a narrated tour of 20 historic places of interest along the Fulton Chain aboard antique wooden boats.

Town of Webb Historian Peg Masters compiled the list of locations of historical note and provided the narrative and accompanying vintage photos that will be utilized by those guiding the tour.

The list of historic properties includes the Hollywood Hills Hotel on First Lake, deCamp Islands (known as Treasure and Skull Islands) at the entrance to Second Lake, the site of the Bald Mountain House Hotel on the north shore of Third Lake, and St. Peter’s Episcopal Church on Fourth Lake.

Guides will also visit Indian Point on the First Lake Channel, site of the 1833 murder of Native American trapper Peter Waters, known as Drid, at the hands of Nat Foster.

Among those who will be donating the use of their antique or historic boats are Ken Hinckley of Big Moose Lake, Diane and Chris Gaige, Deke and Carol Morrison, and Doc and Judy Foley who are organizers of the inaugural event.

Many of the boat taxis received high honors at the Antique Boat Show which takes place every July at the Old Forge Lakefront and is presented by the Adirondack Chapter of the Antique and Classic Boat Society.

The cost of the approximate two-hour tour is $50 per person and includes a complimentary drink/beverage of your choice at Sister’s Bistro, Tony Harper’s Too or Slickers at the conclusion of the tour.

All proceeds will benefit the operational expenses at the Goodsell Museum.

Pre-sale tickets are available at the Goodsell Museum located at 2993 State Route 28, or by calling (315) 369-3838. Tickets will also be available the day of the tour, seating provided.

The Central Adirondack Sailing Association (CASA), which opened its season over the July 4th weekend, and holds 17 races throughout the summer, held its final event of the season on Saturday, August 20.

Race events include a three-race regatta dedicated in memory of long-time member George Blakeman, as well as an end of the year party that was held on Saturday, August 27.

The creation of The Central Adirondack Sailing Association can be credited to Dave Palmer of Palmer Point Boats who, in 1965, placed an advertisement in the Labor Day issue of the newspaper requesting that the community join him for a revival of sailing on the Fulton Chain of Lakes.

According to long-time CASA member Tom McCabe, sailing on the Fulton Chain first began with Native Americans utilizing deer hides attached to their canoes as make-shift sails which allowed them to take advantage of the prevailing east to west blowing winds, thereby allowing for faster travel throughout the area.

However, the tradition of sailing as it is envisioned today did not gain popularity in the area until the 1930’s and 1940’s.

In the 1950’s and early 1960’s, sailing on the lakes had lost some of its popularity, thereby prompting Palmer to offer out his boats to any interested parties, just in the hopes of having someone to race.

According to McCabe, the 1965 Labor Day Regatta consisted of a hodgepodge of 10 or so boats, mostly made up of wooden snipes.

The following summer, Palmer, with the help of McCabe and Blakeman, organized a series of Saturday races as well as races for beginners on Wednesday afternoons.

In 1970, CASA became an official dues-collecting organization and with a membership consisting of Blakeman; McCabe and his father, Tom Sr.; Palmer and his wife, Karen; Dick Rettig, Leroy Jones, Tom Poyer, Bob Salsbury and Phil Sanzone the organization quickly gained popularity in the area.

In the beginning, McCabe said the races consisted of a mixed fleet of 10 to 12 boats per race which included Snipes, Flying Scots, Rhodes Bantons, and Hobe Cats in the Hull Division; and smaller boats like Sunfish and Scorpions in the Board Division.

They would use the hotel docks as their race markers.

“Every Saturday was an event. We would race off of Rocky Point, Foley’s North Woods Inn, Holl’s Inn, Cohasset Inn, the Mohawk Hotel, and Daiker’s,” McCade said.

“The hotels would actually announce to their guests that we were racing and everyone would come down and cheer us on and stay at the end for some laughs and a few beers,” he added.

Over the summer members can compete in anywhere between seven and 17 races with the scores being added and tallied from the best seven scores from each team.

At the end of the 17 races, the team with the lowest number of points is considered the overall winner.

According to 15-year member and CASA Commodore, Paul Willsey, each day of racing consists of two races in which all competitors typically use the same style sailboat to compete.

The sailboats most commonly used in the Hull Division by CASA are 19-foot long Flying Scots, which were first designed by Gordon K. (Sandy) Douglass in 1957.

The Flying Scot is a one-design boat that is noted for its ease of handling and durability.

Because it is a one-design boat, all Flying Scot boats are built to the same specifications and thus have equal chances in winning a race, regardless of when the boat was built.

This type of boat is popular amongst sailboat racing associations because this type of construction helps to eliminate all other variables other than the skill of the crew.

The final results for the season based on the cumulative score of the seven best races were:

Congratulations also to the teams of Stanton and Belknap, Cowles and McCabe, Smith, Steigerwald and Jeffrey, Menz, and Mandia who received fourth through ninth place, respectively.

CASA would like to thank the race committee of Doug Smith, Steve Mandia and Mark Steigerwald for their efforts in setting up a great course.

Those seeking more information about the Central Adirondack Sailing Association can contact CASA Commodore Willsey at (315) 357-6060. 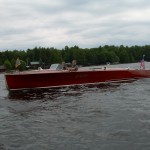 Chris and Diane Gaige in their "Woody Boat"

Old Forge residents Doc and Judy Foley will join the Town of Webb Historical Association in presenting a narrated tour of the Fulton Chain of Lakes aboard antique wooden boats on Saturday, September 17.

The event will begin at 1 p.m.

All proceeds will benefit the Goodsell Museum, home of the Town of Webb Historical Association.

Dunn’s Boat Marine of Big Moose Lake and Rivett’s Marine of Old Forge will each provide a boat, along with many other wooden boats from private individuals.

Each boat will have a driver and a narrator to detail the history of various points of interest along the way.

The cost is $50 per person for this inaugural event and includes a complimentary drink/beverage of your choice at Sister’s Bistro, Tony Harper’s Too or Slickers at the conclusion of the tour.

Boarding will take place at the Old Forge Pond navigation docks and plenty of parking will be available at the Hemmer Cottage.

No tickets will be sold the day of the event. Rain date is Sunday, September 18.

“We hope people will take advantage of this opportunity to ride in a vintage boat-the way visitors did many years ago-as they learn more about many of the structures that still exist along the shore, as well as the location of historical sites,” said TOW Historical Director Gail Murray. 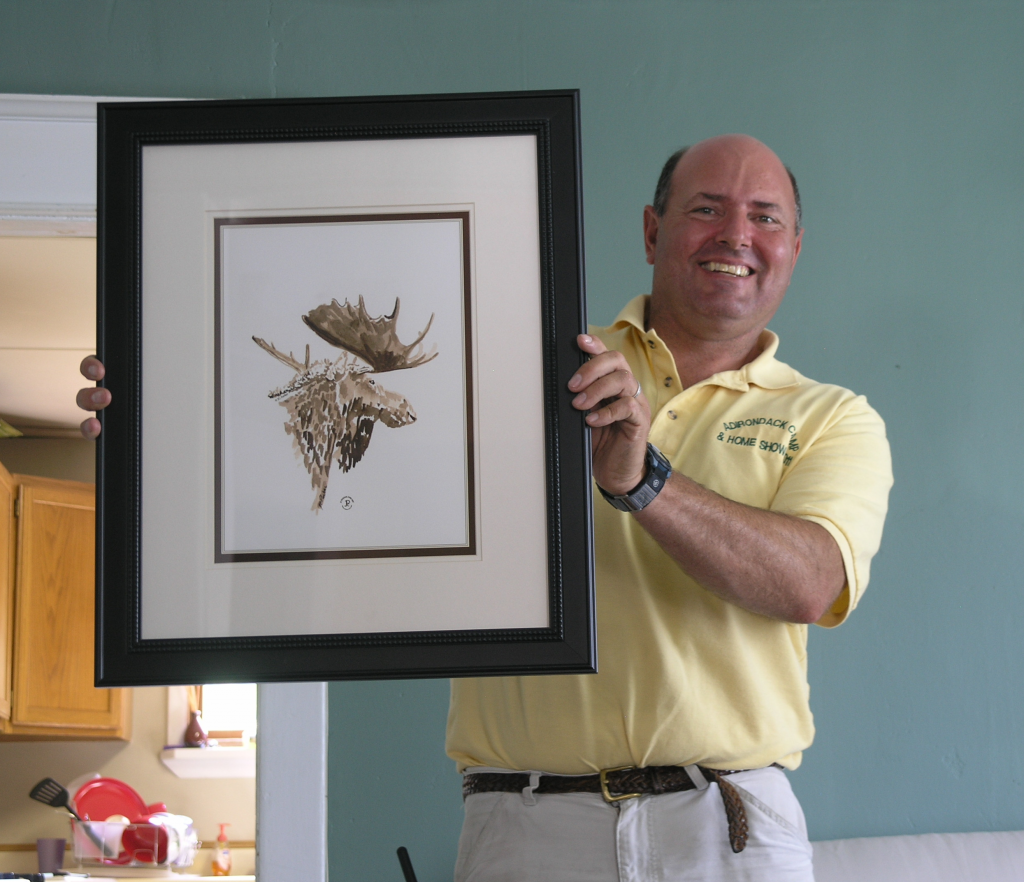 Bill Brooker, owner of Brooker's True Value Hardware in Old Forge, has donated a framed moose print to be raffled off during View's annual Folton Chain House Tour by Boat

The print is by nationally-known artist JC Parker of the Saratoga Springs area.

Brooker has partnered with Parker who will be providing prints of his work based on themes of upcoming local events. The artwork will be raffled during the events.

Proceeds of the raffles will benefit the general operating fund of View, the new arts center in Old Forge.

The painting is currently on display at View. Tickets are $1 each or six for $5 and are available for sale at View. END_OF_DOCUMENT_TOKEN_TO_BE_REPLACED