A memorial service will be held for Ceil Buckley on Saturday, June 1 at Niccolls Memorial Church. The service will begin at 11 a.m. with Reverend Lawrence Bartel officiating.

A dedication ceremony will follow immediately afterward at the Old Forge Library.

Initially, they met in the Kashiwas’ home. Hank Kashiwa had ingeniously rigged a quilt frame to be lifted by pulley to the ceiling, so it would be out of the way when not in use.

Quilts made by the women’s group have been raffled annually to help pay The Old Forge Arts Center’s heating bill.

The group has added Big Moose Chapel, other organizations and most recently, The Strand, to the list of benefactors who receive quilts for the purpose of fund-raising raffles.

Buckley’s daughter Betty Rannels proposed creation of a cabinet to house Ceil’s books and thimble collection at the library.

The library will, with Buckley’s estate, co-fund the cabinet.

Tetreault and Schmid are donating their labor to the cause, for which Rannels, library staff and board members are deeply appreciative.

Dedication of the cabinet will be held immediately following Ceil Buckley’s memorial service. Light refreshments will be served at the dedication. 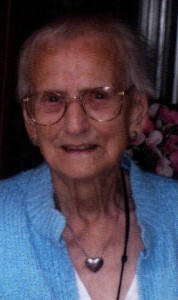 She was born on January 30, 1913 a daughter of the late Henry and Clara (Rozon) DeMoors in Thendara on the corner of Beech and Birch Streets, which once served as the first school house in the Thendara.

Ceil was known for her fine handiwork and for most of her life enjoyed knitting, crocheting, and quilting.

She began to quilt at a young age, joining her mother and other local women at the Thendara Town Hall in making quilts to help with the war effort during World War I.

Ceil was a longtime member of the Pointed Pine Quilters of Old Forge and joined her fellow quilters each Tuesday at the Old Forge Library—a practice that she enjoyed nearly to the end of her life.

“I’m thankful that I can do it. I don’t know how people sit and do nothing all day. I have a bad shoulder and a bad hip but it doesn’t stop me from doing the kind of stuff that I like,” Ceil said in an interview on her 99th birthday.

Many of her hand-stitched works were donated and sold at the annual Big Moose Chapel Bazaar.

She loved animals of all types, but it was her family who brought her the most joy in her life.

Most recently she was honored by her family, friends and community with a 100th birthday celebration at View, the arts center of Old Forge.

In October of 2012, it was announced that a new award was established in Ceil’s name by the Pointed Pine Quilters at View’s annual Quilts Unlimited Exhibition. The Cecilia Buckley Silver Needle Award is presented to the individual with the best hand-quilted entry in the show.

She also leaves many nieces and nephews and many very special friends. And last but not least her feline companion Sam.

A memorial service will be held in May at Niccolls Memorial Presbyterian Church in Old Forge at a time to be announced. Reverend Lawrence Bartel will officiate.

For those who wish, please consider the following charitable organizations that were very important to Cecelia.

For online expressions of sympathy please go to www.dfwefh.com. 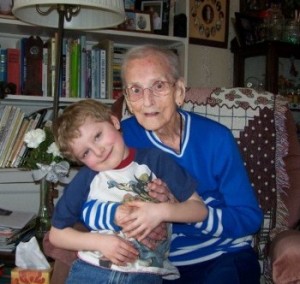 Ceil Buckley celebrated her 99th birthday on January 30, and marked the occasion at her Thendara home with family and friends.