On the heels of the biggest and best St. Paddy’s Parade to date, Central Adirondack Association officials are looking at ways to improve parades on Main Street.

It is apparent to them that given the size and popularity of the numerous parades in Old Forge, safety and control issues must be improved.

CAA director Chip Kiefer, coordinator of several local parades, has initiated a standardization program to ensure that all parades currently scheduled and any future parades will have a format to follow. END_OF_DOCUMENT_TOKEN_TO_BE_REPLACED

The Central Adirondack Association (CAA) held its annual meeting at The Old Mill restaurant on Wednesday, January 22, offering members and guests an opportunity to enjoy appetizers and refreshments while discussing business in a casual, social setting.

Laurie Barkauskas, CAA event coordinator, delivered an overview of events sponsored by the CAA in 2013, and ideas for future events were welcomed.

Elections for the organization were not held this year as the slate of officers are entering the second of their two-year terms.

The winners of the 2013 Snodeo raffles were drawn at the end of the event on Sunday, December 15 at the George T. Hiltebrant Recreation Center.

First prize winner of a new snowmobile was Michael Lulli of Newburgh, NY. Kevin Blair of Glenwood, NJ held the winning ticket for a Polaris 120 snowmobile.

Victor Dagostino of Wayne, NJ took the second cash prize of $1,000; Bill McGough of Woodgate won third prize of $500; fourth prize winner of $300 was Wayne Walters of Mechanicsburg, PA; and fifth and sixth prize winners of $100 each were Jennifer Conover of Saratoga Springs, NY and Brian Teichman of Crompond, NY.

The Snodeo is currently in its 37th year. The annual event is the Town of Webb’s official kick-off to the snowmobile season.

The Central Adirondack Association Board of Directors passed a resolution on Thursday, September 5 in support of maintaining the rail and recreation trail system on the Remsen-Lake Placid travel corridor.

The resolution supports the original concept of the 1995 DEC Unit Management Plan for the railroad corridor, which provides for the development of rail service and a recreational trail.

In the resolution, the CAA directors acknowledge the proven economic impact of the Adirondack Scenic Railroad for the local communities, the historical and cultural significance of the railroad, and the access provided by the railroad for the physically challenged.

END_OF_DOCUMENT_TOKEN_TO_BE_REPLACED

A large crowd of people gathered at the Old Forge lakefront on Sunday, September 1 to listen to the music of the Paul Case Band and to hear the announcement of the winners in the Central Adirondack Association’s annual drawing for a car and cash prizes.

The Labor Day celebration concluded with a fireworks display. 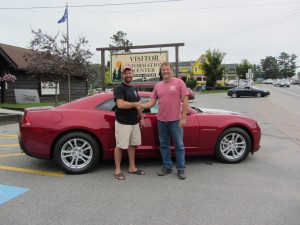 Don Haehl presenting the keys to the 2014 Chevy Camero to winner Tim Kuhn of Marcy, NY. He meant to buy a ticket last year, but they sold out before he could. He and his wife had a miscommunication and thought each other bought one. He said, “I wasn’t meant to win it last year.” He only bought one ticket this year. 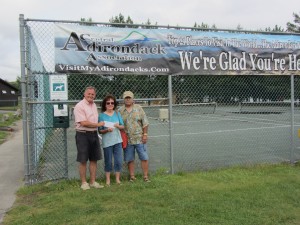 Mike Farmer handing over the $10,000 check to winner Judy and Sonny Rambone, of Great Bend, NY. She donated $500 of her check back to the CAA. She plans to redo her carpet and pay off some loans.

The Central Adirondack Association (CAA) is seeking volunteers to man its booth at the New York State Fair in Syracuse from Thursday, August 22 through Monday, September 2nd.

The booth must be staffed from 10 a.m. until 10 p.m., as required by the State Fair Board. Six-hour or four-hour shifts are available. It is recommended that two people staff the booth for each shift so that breaks are covered and one person remains at the booth at all times.

Volunteers will receive admission tickets to the fair, $10 for parking and up to $50 for gas.

END_OF_DOCUMENT_TOKEN_TO_BE_REPLACED

The 62nd Annual Central Adirondack Art Show at View, the arts center in Old Forge, will begin with an opening reception on Friday, July 5 from 5 to 7 p.m.

The exhibition, known for its wide variety of fine arts including acrylics, oils, watercolors, drawings, pastels, graphics, mixed media and sculpture, began as an exhibition hung on its founder Miriam Kashiwa’s lawn.

It has grown to include quality work from local and national artists.

The opening will include music by Bob Liddle on saxophone, hors d’oeuvres and free admission.

The show will be on display through August 11th.

Exhibition admission is $8/$4 members and groups of six or more, and free for children under the age of 12.