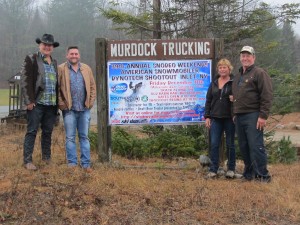 The 26th annual Shoot Out, a snowmobile event that features out-of-the-box racing trials and testing of sleds from the four major snowmobile manufacturers, will return to Inlet on Friday, December 11 following a 17-year hiatus.

The event, sponsored by American Snowmobiler Magazine and Dynotech Research was co-founded by Jim Czekala, Tom Smith and the late George Taylor in 1990 and was held on a farmer’s field in South Trenton. END_OF_DOCUMENT_TOKEN_TO_BE_REPLACED

The Town of Webb Planning Board held a public hearing on the proposed Fastrac expansion project on Tuesday, December 1st at the Park Avenue Building in Old Forge.

He described revisions that Fastrac had made in response to concerns communicated by nearby property owners.  END_OF_DOCUMENT_TOKEN_TO_BE_REPLACED

Playing to a full crowd in their home gymnasium, the Town of Webb boys varsity basketball team started their season with a victory against Dolgeville on Wednesday, December 2.

This was the team’s first win in three years.

The final score was 71-37, Webb having outscored their opponent 40-15 in the second half. END_OF_DOCUMENT_TOKEN_TO_BE_REPLACED

On Saturday, November 21, 2015, an informative and supportive lung cancer vigil was held in the Inlet Town Hall. Adele Burnett, whose father died of lung cancer, and myself, whose brother also died of lung cancer, organized the small gathering which was one of hundreds held around the United States and a few in foreign countries.

The welcoming vigil was followed by a blessing of those in attendance by Rev. Lawrence Bartel of Niccolls Memorial Presbyterian Church.   END_OF_DOCUMENT_TOKEN_TO_BE_REPLACED

Donna Myers of Old Forge, a longtime participant and fundraiser for Utica’s Great Ameri-can Heart Run & Walk, is among four individuals who have been named Red Cap Ambassadors for the 2016 event that will be held Saturday, March 5th.

Myers was selected for the honor due to her 14-year event participation and for her efforts in enticing family and friends—locally and throughout the United States—to walk and raise funds for the American Heart Association. END_OF_DOCUMENT_TOKEN_TO_BE_REPLACED

Following is Superintendent Rex Germer’s Report from the Town of Webb Union Free School District’s Board of Education meeting held on December 1st.

The Town of Webb Union Free School District is continuing to hear that there will be changes to the APPR, specifically its connection to student scores, coming in the near future.

Governor Cuomo is being brought into the conversation as a supporter of the change, which goes against his previous push to make the connection stronger during the last budgetary cycle.  END_OF_DOCUMENT_TOKEN_TO_BE_REPLACED