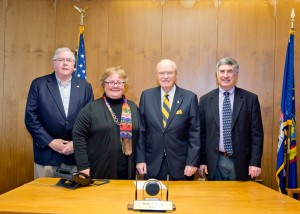 The Town of Webb Union Free School District’s Board of Education held a meeting on Wednes-day, October 21, where it reviewed the following information and took the following action*:

Approved the Minutes of October 6, 2015 meeting.

Herkimer County Sheriff Chris Farber was in Old Forge on Tuesday, October 27 to deliver a mobile radio and related equipment to the Town of Webb Police Department.

The equipment was acquired through a Homeland Security Grant administered through the Sheriff’s Office.

Barry Miller, the owner of the Beaver River Hotel, was tragically killed on September 23rd.

Mr. Miller was an EMT in his hometown of Bergen, NY, west of Rochester, riding in the passenger seat of the ambulance on a call when it rear ended a backhoe.

Mr. Miller was a fireman, EMT, county coroner and an accomplished businessman.

This author had the honor of getting to know Barry over the last five years.

In the fall Mr. Miller would organize an Oktoberfest, and a group of hikers starting at Twitchell Lake would hike over to Beaver River.

One Oktoberfest over 110 people traveled to Beaver River, presenting a challenge in serving a lunch to everyone.

For the last hike on September 12th, my wife Diana and I were able to speak to Barry and ask him about his business.

He told us that in his younger years he worked for a company selling audio visual equipment.

He said many times he had clients complaining that the furniture available was never set up with the proper cableways and layouts as needed.

He said he thought to himself, “I can do better.”  He did, he started making furniture that was better suited for this purpose.

Over time he started hiring people. He said, “I realized one morning leaving my house with four employees working in the basement, ‘Hey I can do this!’ I quit my job and rented some space and continued on. I now have 22 employees.”

Barry went on to explain how he was in the process of building a complete set of lecterns for the President of the United States, 43 in all.

“The blue ones are bullet proof; it’s funny you can just buy the material in four by eight foot sheets from a supplier, no questions, no forms to fill out.”

In addition to the President’s lecterns, his company is building a set for the Secretary of State.

He went on to say “Beaver River is an interesting place: On a Saturday 1,200 snowmobiles will pass by my door; by sundown everyone is gone. I go to bed by 8:30.”

He said he would leave the Rochester area on Thursdays after work, drive to Stillwater and head into Beaver River and start up the hotel.

He would be open Friday, Saturday and Sunday then shut down everything.

He would place the beer in the underground root cellar, drain the water, antifreeze in the traps, shut off the heat and head home to start work on Monday.

He said, “I know the Thompsons don’t like us here, but I believe that together we draw more people here and in the end they win too.”

As the conversation eventually got interrupted I never got around to asking him why he purchased the Beaver River Hotel. At the time I thought that when we met again I’d ask that question.

It’s that time of year again. It sort of crept in like a thief the past few days.

Only a day or two ago we were marveling at the bright blue skies and the symphony of beautiful colors as Fall made her debut.

Now it’s dark and gloomy, rain is falling and so are my spirits. As I sit here writing I recall a true story from many years ago. END_OF_DOCUMENT_TOKEN_TO_BE_REPLACED