The Central Adirondack Partnership for the 21st Century (CAP-21) will be holding its 16th Annual Hanging Flower Basket Party on Wednesday, June 10 from 4 p.m., at the George T. Hiltebrant Recreation Center and Pavilion on North Street in Old Forge.

All are welcome to come and dig in the dirt. Just bring some gardening gloves and a gardening shovel or trowel.  END_OF_DOCUMENT_TOKEN_TO_BE_REPLACED

Plenty of activities are planned for our weekly Wednesday gatherings in June at SHARP, our Senior Health Activities and Recreation Program.

We are also preparing for our big fund-raising community event on Saturday, June 6, Retro Day, that will celebrate the 1950’s. CAP-21 is sponsor of this event.

During our program on June 3 we will be involved with final planning and putting the final touches on the event.  END_OF_DOCUMENT_TOKEN_TO_BE_REPLACED

Ada June Rannels received her B.A. degree in Film and Women’s Studies from New York Univer-sity/Gallatin School of Individualized Study during a graduation ceremony held on Thursday, May 21 at Avery-Fisher Hall in  Lincoln Center.

In attendance were her parents Norman and Betty Rannels of Thendara and her sister Joy.

Ada was named a Univer-sity Honors Scholar by maintaining a cumulative grade point average of 3.5 or higher. She achieved a 4.0 in her last semester. She received a Founders Day Award Certifi-cate and wore a gold tassel at her commencement exercises in recognition of her achievements.

Ada plans to live and work in New York City this summer and plans to move to Hollywood, CA in the fall.

She is a 2011 graduate of the Town of Webb School.

Bill Brooker, owner of Brooker’s True Value Hardware and Lumber, will present the Adirondack Camp and Leisure Show at the George T. Hiltebrant Recreation Center in Old Forge on Friday, Saturday and Sunday, June 5, 6 and 7.

The event will feature dozens of vendors showcasing their services and lines of home improvement and beautification products that will appeal to the present or future Adirondack homeowner. END_OF_DOCUMENT_TOKEN_TO_BE_REPLACED

The Town of Webb Police Department has reported the following law enforcement activity.

• A 33-year-old Inlet man was charged with Aggravated Unlicensed Operation 3rd following an incident that occurred on Tuesday, May 19 at 5:16 p.m.

According to the report, a traffic stop resulted in the arrest of the man for the said offense. END_OF_DOCUMENT_TOKEN_TO_BE_REPLACED 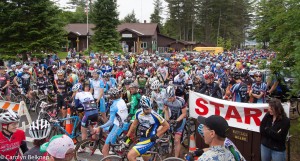 The start of the Black Fly Challenge in Inlet. File photo by Carolyn Belknap

On the morning of Saturday, June 13, thousands of cyclists and spectators will gather in Indian Lake for the start of what has become widely known as The Adirondacks’ Greatest Race. END_OF_DOCUMENT_TOKEN_TO_BE_REPLACED

The guided hikes are sponsored by VIEW, the arts center in Old Forge.

The first hike on Saturday, June 6 is to Bug Lake to view frog orchids in bloom.  END_OF_DOCUMENT_TOKEN_TO_BE_REPLACED