A quarter-mile stretch of the Moose River from the Route 28 bridge south will be closed to paddlers from noon on Tuesday, October 8 until noon on Wednesday, October 9 due to the installation of the bridge to connect the pedestrian/bicycle TOBIE trail.

Buoys and signs will be put in place to mark the area of river closure for the 24-hour period, according to Mike Carpenter, resident engineer for project contractor Barton & Loguidice. 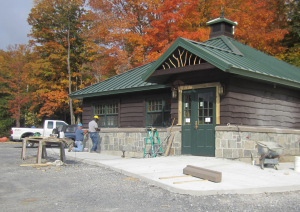 A 350-ton crane will lift and place the entire bridge on a new bridge seat, a shelf on the face of the bridge abutment.  END_OF_DOCUMENT_TOKEN_TO_BE_REPLACED

Adirondack Kids Day™, a day-long event that celebrates the outdoor activities described in the Adirondack Kids series of books, will be held at various locations throughout Inlet on Saturday, October 5th.

The day begins with a Pancake Breakfast from 8 to 11 a.m. at the Inlet Emergency Services Building, sponsored by the Inlet School’s PTP in support of the children’s ski program.

The cost is $7 for adults and $5 for children ages 12 and under. END_OF_DOCUMENT_TOKEN_TO_BE_REPLACED

Last weekend’s sun and temperatures in the 70s served to highlight the fall colors and bring lots of visitors to this part of the Central Adirondacks.

“In terms of weather and leaves, it was a perfect storm,” said McCauley Mountain Manager Steve Udavinis. 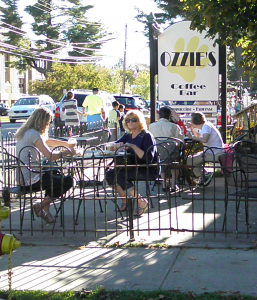 Uzdavinis reported that the McCauley chairlift served close to 1,000 people per day on Saturday and Sunday.

“It was a blockbuster weekend. We always like to say there is room for more, but we were at capacity,” he said.

Town of Webb Publicity Director Mike Farmer commended Uzdavinis and his staff for continuing operation of the chairlift after the usual 4:30 p.m. closing time to accommodate the folks who were still waiting in line to enjoy the experience.

Cars filled the streets and downtown parking lots, as well as trailheads. Vehicles lined Rondaxe Road from the Bald Mountain trailhead down to Route 28. END_OF_DOCUMENT_TOKEN_TO_BE_REPLACED

An audit of the Town of Forestport, conducted last month by the New York State Comptroller’s Office, found that the Forestport Town Board repeatedly underestimated revenues, and that portions of the fund balance for subsequent years’ budgets were not used as planned.

The audit, which covered the period of January 1 to December 31, 2012 and looked back to January 1, 2008 to review ﬁnancial trends, also showed that the water and sewer districts were not properly funded—resulting in the general fund having to make interfund loans to these districts to support their operations.

The audit compared the Town’s budgeted revenues with actual results for ﬁscal years 2008 through 2012.

END_OF_DOCUMENT_TOKEN_TO_BE_REPLACED

Anyone interested in participating should meet at the Moss Lake trailhead on the Big Moose Road at 9:30 a.m. The ride begins at 10 a.m. Rain date is Sunday, October 20th.

Later that same day, they invite all interested bikers to a Meet and Greet session and meeting to discuss the formation of a local mountain bike club. END_OF_DOCUMENT_TOKEN_TO_BE_REPLACED

Joan Smith of Defusto Dr., Eagle Bay passed away at Crouse Hospital in Syracuse on October 2, 2013, following a short illness. Calling hours will be held at Kowalczyk Funeral Home, 1156 Lincoln Ave. in Utica on Saturday, October 5 from 9 to 10 a.m. A funeral service will follow at 10 a.m. at Holy Trinity Church at 1206 Lincoln Ave.

A full obituary will appear in next week’s paper.

The magazine, like the TV program, highlights the arts, culture and heritage of the Mohawk Valley and surrounding areas.

The four-color monthly publication is available at its sponsoring businesses, including  Shelter and View of Old Forge, as well as at Stewart’s Shops in and around the Barneveld, Camden, Cooperstown and Sharon Springs areas. It is free of charge.

Sharry and Lance, along with host Richard Enders were in Old Forge on Wednesday, October 2 to talk with Bob Card about the Strand Theatre’s digitalization project and the renovation of the former Howard Johnson’s building, now occupied by the Front Door Diner and Back Door Bar.

The segment is scheduled to appear on October 6th.