The Jefferson Lewis BOCES is asking the public across 18 school districts to participate in a survey exploring the options for shared services, reorganization and/or merging with neighboring school districts.

The School Collaboration Survey is currently posted on every school district’s website.

For Inlet, Old Forge and Forestport those links are
inletcommonschool.org, towschool.org, or adirondackcsd.org, or paper copies can be accessed by calling the district offices at (315) 357-3305 (Inlet) and 369-3222 (Old Forge).

The survey contains 18 questions and, according to the website, should only take five to ten minutes to complete. The links are active now through Friday, October 4th.

Survey questions measure support for sharing services such as transportation, business and food services, administration, and additional BOCES programs that currently include professional development and training.

END_OF_DOCUMENT_TOKEN_TO_BE_REPLACED

Dick Bird was unanimously elected as the new president of the Adirondack North Country Association (ANCA) at the organization’s annual meeting held on Thursday, September 26 at the Wild Center in Tupper Lake.

Bird, who has been on ANCA’s board for over 25 years, joined during the time he served as Director of Planning, Tourism and Economic Development for Hamilton County. He is replacing out-going president Stephen Erman.

“Dick’s opinion on issues is sought by everyone on the board—he is the go-to guy. He has a great grasp on not only this region, but of the entire north country,” said fellow director Mike Farmer.

“I’m very excited. It’s an opportunity to bring attention to this part of the region,”  Bird said.

Bird is owner of Bird’s Marine and Adirondack Real Estate of Old Forge and Raquette Lake.

He has been actively involved with the local Central Adirondack Association (CAA) for years, serving for a period as president.

He is also past-president of the Adirondack Regional Tourism Council (ARTC).

END_OF_DOCUMENT_TOKEN_TO_BE_REPLACED

The 46 Lounge & Sky Bar, located above Tony Harper’s in the center of Old Forge, is set to open Friday, September 27th. The rooftop bar, which features panoramic views, has been designed to give a relaxing atmosphere to 21-and-over patrons, according to co-owners Brian and Lisa Murphy.

The social area of the establishment is open-air, with the bar under roof. A grassy section encircles the bar. Tiki torches, a curtain, space heaters and large fans with misters are all in place. 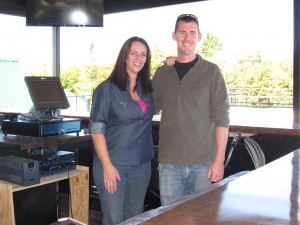 “We’ll be ready for whatever direction the weather takes us,” Brian said.

The space was built with eco-friendly features in mind, according to the Murphys, with some recycled materials used in construction.

END_OF_DOCUMENT_TOKEN_TO_BE_REPLACED

Mike Griffin was presented with the Kiwanian of the Year Award at a Kiwanis Club of the Central Adirondacks’ recognition event held Sunday, September 22 at North Woods Inn.

Griffin, incoming president of the organization, was recognized for his active participation in all club activities. He serves as president of the Kommunity Youth and Activity Center (KYAC), advisor to Town of Webb School Key Club and Builders Club, and co-chair of the annual car wash fundraising project.

Membership Co-Chair Bob Teesdale, who presented the award, also acknowledged  Griffin as a tireless worker in many of the other Kiwanis activities. He will officially assume the club presidency for the program year 2013-14 on October 1st.

Griffin resides in Old Forge with his wife, Kandis, Town of Webb School Counselor. He is retired from National Grid and currently works in the Town of Kirkland Code Enforcement Office.

The Inlet Historical Society has acquired a collection of wedding plates that once hung on the walls of the tavern area of the Holl’s Inn through a donation by Victor Holl.

From the early 1930’s, the owners of Holl’s Inn had a tradition of adorning the walls with commemorative plates inscribed with the date and names of those who held their  weddings or anniversaries at the establishment.

END_OF_DOCUMENT_TOKEN_TO_BE_REPLACED

Author Erik Schlimmer will be in the area on Saturday, September 28 to sign copies of his new book, Blue Line to Blue Line: The Official Guide to the Trans Adirondack Route, at two separate venues.

In his guidebook, Schlimmer, a skilled backpacker, takes readers along the Trans Adirondack Route, a long-distance primitive hiking path that extends 235 miles across the Adirondack Park, the largest park and forest preserve in the Lower Forty-Eight.

END_OF_DOCUMENT_TOKEN_TO_BE_REPLACED

The donation of these specially designed and potentially lifesaving animal oxygen mask sets will enable rescue squads to efficiently administer oxygen to a stricken animal in an emergency situation. END_OF_DOCUMENT_TOKEN_TO_BE_REPLACED