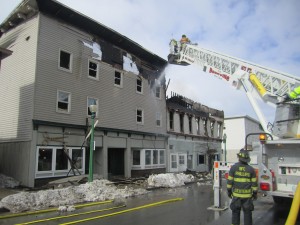 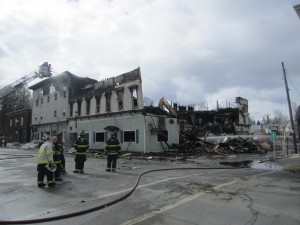 Local fundraising efforts are in progress to aid the 11 families who were displaced by an apartment building fire that occurred on Main Street in Boonville on Thursday, March 28.

The fire was started by a male smoking in bed causing fire fighters to respond to the alarm around 2 a.m. on Thursday.

At 10:30 a.m., fire fighters from Boonville, Constableville, Floyd, Remsen, Stittville, and Woodgate were still tending to the fire.

Many of the area churches, including the United Methodist Church, Chamber of Commerce, Community Bank, Red Cross and individuals are working together to reach out to the 29 fire victims who lost their homes and possessions in the early morning fire.

According to Boonville Fire Chief Dave Pritchard, the fire destroyed nine apartments-seven in the Hutchins building and two in the adjacent Hair Spa building.

Donations in the name of the fund can be sent to: Boonville Chamber of Commerce, P.O. Box 163, Boonville, NY 13309. Gas and grocery store card donations, can be made to the Chamber. END_OF_DOCUMENT_TOKEN_TO_BE_REPLACED

The Niccolls Church Women’s Fellowship invites the community to take part in a project that will benefit the Church World Service charity.

During the month of April, the women will be collecting items for hygiene kits which will be sent to Church World Service (CWS) for redistribution in cases of natural disasters, violence, or grinding poverty.

At the time of Hurricane Sandy, CWS sent 18,420 hygiene kits to those affected by the storm. Kits are sent to victims of disasters domestically and around the world.

The community can assist by contributing a complete kit or any of the individual supplies for a kit.

Kits are easy to put together. Just place all items (listed below) in a one-gallon plastic bag with a zipper closure, remove excess air from the bag, and seal. END_OF_DOCUMENT_TOKEN_TO_BE_REPLACED

The Forestport town board, meeting in special session April 1, awarded construction bidson the “twin bridge” construction on River Street in the hamlet of Forestport to Bell Construction of Poland, NY. Forestport’s Town Supervisor signed the construction contract for $606,324, and then the board authorized a change order for the contract reducing the cost to $558,324.

The change order allows a different New York State Department of Transportation approved bridge rail than the one listed in the advertised specifications. Supervisor Hasenauer, following board approval, signed a contract with Steven Zarnoch of New York Mills to act as Clerk of the Works on the town’s behalf during the construction phase.

Zangrilli Engineering of Whitesboro had been hired to draw the plans for the bridge, and contractors presented bids to the town based on those plans on March 1.

Construction on the project, which must be completed by October 31, 2013, will begin as soon as weather permits.

Andy Flynn, owner of Hungry Bear Publishing of Saranac Lake, recently released an Adirondack Park User’s Guide eBook, “New York’s Adirondack Park: A User’s Guide,” that is currently available in the Kindle platform at Amazon.com. The guide, which was published by Flynn with assistance by friends at the Adirondack Forest Preserve Education Partnership (AFPEP), answers the question—“What is the Adirondack Park?”

Using the Adirondack Park’s leading government, not-for-profit and historical organizations, the “User’s Guide” offers residents and visitors a reference guide from respected sources that helps them responsibly use the Forest Preserve.

The Herkimer County Office for the Aging recognizes that those caring for loved ones with Alzheimer’s sometimes experience stress.

Support services are available through the Office for the Aging for anyone who may be suffering from the following 10 Signs of Caregiver Stress which have been identified by the Alzheimer’s Association: END_OF_DOCUMENT_TOKEN_TO_BE_REPLACED

Anglers who take to area streams, lakes and ponds for trout fishing this season may find themselves catching less fish due to a decrease in the amount of fish that will be stocked by the Department of Environmental Conservation.

The DEC plans to stock 2.1 million brown, rainbow, and brook trout in 307 lakes and ponds and approximately 3,000 miles of streams this spring, down 15 percent from last year.

Officials said the decrease is due, in part, to two large-scale outbreaks of fish disease at the Rome Hatchery which caused a stocking reduction of approximately 320,000 fish.

The Rome Hatchery is one of the DEC’s largest, with an annual production of nearly 160 thousand pounds of brook, rainbow, and brown trout.

Fish health concerns at the hatchery began in November 2011 when large numbers of brown trout fry succumbed to a number of diseases. END_OF_DOCUMENT_TOKEN_TO_BE_REPLACED

The 16th Annual Adirondack Park Local Government Day Conference will take place on Wednesday and Thursday, April 24 and 25 at the Crowne Plaza Resort in Lake Placid.

This year’s conference will focus on Adirondack Park economic development strategies and the promotion of projects that benefit rural economies.

New York State Senate and Assembly members representing the Adirondack Region will be present to discuss issues that affect Adirondack communities during a luncheon forum on Thursday.

The conference will highlight community projects from around the Park and include presentations on infrastructure, entrepreneurial initiatives and municipal energy management.

Training workshops presented by the Department of State and other professions will provide valuable instruction, advice and CEO and CLE credits for local officials. END_OF_DOCUMENT_TOKEN_TO_BE_REPLACED