Gail Murray has announced she will be stepping down from her position as Director of the Town of Webb Historical Association effective November 1.

Murray, who moved to Old Forge in 1986 with her husband Randy and son Terry, was appointed to the position in April 2002.

She had previously worked eight years at the front desk of the Arts Center/Old Forge and part-time at Ed Diamond’s Antiques and Things—employment experiences that she said were incredibly helpful to her as historical director.

Murray said she was a member of the Historical Association Board  when then-director Peg Masters, Town of Webb Historian, resigned from the position.

She was asked to write a job description for a new director and when she started writing it, she said to herself, “I can do that.”

She was hired at a part-time capacity, but it wasn’t long before the Goodsell Museum’s hours grew from a three-day operation to a full five days, making the organization eligible to apply for grant opportunities.

The Town of Webb Board and Town department heads met on Wednesday and Thursday, October 10 and 11 to discuss the tentative budget for 2013.

Supervisor Ted Riehle has plenty of experience crafting and submitting budgets as former head of the Wastewater Treatment Department.

But still in the first year of his first term as Town Supervisor, this is Riehle’s first opportunity to serve on the other side of the desk.

And he said the process seems to be going fairly smoothly.

He admits he will be able to assess things better once the budget becomes permanent and he can look back.

Riehle said there is a lot of assistance that the State of New York Comptroller’s Office makes available to municipalities, as well the Association of Towns END_OF_DOCUMENT_TOKEN_TO_BE_REPLACED 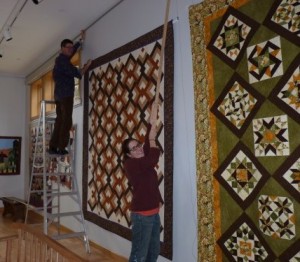 View’s Linda Weal and Stephen Wick were among those hanging quilts this week for this weekend’s Quilt Exhibition opening. Photo by Michele deCamp

The 26th Annual Quilts Unlimited Exhibition, a competitive exhibit that features traditional and eclectic quilts and wall hangings created by quilters from across the country, will officially open at View in Old Forge on Saturday, October 13.

Attendees will enjoy music, light refreshments, and a variety of quilt-related raffles.

And on Saturday and Sunday, there will be a variety of workshops, demonstrations and vendor displays.

Award-winning quilter Mary Knapp will present an interactive lecture, “Uniquely You,” at 10 a.m. that will provide insight into quilt design and technique.

The Town of Webb Board grappled back and forth Tuesday, before finally agreeing to amend the Town of Webb Zoning Ordinance to allow a planned district for Adirondack Homes, a company of local businessman Mike Mitchell, which will allow Mitchell to seek Planning Board approval for a residential subdivision in Old Forge.

A public hearing had already been held regarding the proposed ordinance change with little discernible resistance, according to Supervisor Ted Riehle.

The public hearing was held on August 29th.

Riehle questioned Mitchell, who was on hand for Tuesday night’s town board meeting, as to the status of issues that had cropped up that involved the Adirondack Park Agency (APA).

“If there is wetland on a parcel, that parcel cannot be subdivided. Two of the lots in this subdivision fell on the parcel which is adjacent to the river, which constitutes a subdivision of a parcel with wetlands,” Mitchell said.

This meant Mitchell would have to go through the entire APA process, which could take two years and involve hundreds of thousands of dollars in additional studies, according to Mitchell.

“As an alternate means of advancing this project, I asked if we could simply do a lot line adjustment. In effect [this would] move the boundary line between the two lots 27 feet closer to the river. It wouldn’t impact the wetlands. It wouldn’t change the project in any way,” Mitchell said.

The APA agree that a lot line adjustment would be acceptable, Mitchell said. END_OF_DOCUMENT_TOKEN_TO_BE_REPLACED

Representatives of the United States Postal Service met with Woodgate postal customers at the post office on Wednesday, October 10 and announced that the office will remain open, but with reduced hours of four per day.

The announcement followed the review of 118 completed surveys by postal customers of which 93 percent expressed a preference of keeping their post office open.

Postal representative Michelle Kruhl told the crowd of 40 that window hours will be from 8 a.m. to noon Monday through Friday and 8 to 10:30 a.m. on Saturday.

A proposal to keep the lobby open 24 hours a day will be executed following a security check of the facility.

If the lobby is open longer hours to accommodate working residents, an idea to promote a money enhancement for the office by advertising postal box rentals was presented.

The Postal Service will also install parcel boxes in the office for patrons to receive packages when the window is closed. A key will be placed in a postal customer’s mailbox indicating the need for a package pickup. END_OF_DOCUMENT_TOKEN_TO_BE_REPLACED

The bid award package for the construction of the TOBIE Phase 2 Welcome Center in Eagle Bay, which had been submitted by Town of Webb Supervisor Ted Riehle, as authorized by the town board, has been approved by the New York State Department of Transportation, according to Supervisor Riehle.

That amounts to the final authorization before construction with no further signatures or approvals needed, according to Riehle.

“The Welcome Center project will be moving forward,” Riehle said at the town board’s monthly meeting on Tuesday. “We’re good to go.”

Additionally, he said construction is dated to start at the earliest time feasible. Supervisor Riehle said he is hoping for April 1st of 2013 or soon thereafter.

The center is to be located at the former Thibado garage property and will include Eagle Bay’s long-anticipated public restrooms.

Eagle Bay will be lighting its Christmas tree at an event scheduled for Saturday, December 1, at 6pm, according to Town of Webb Councilman Mike Ross.

Old Forge will hold three Christmas tree lightings this season with the official tree lighting to be held on Friday, November 23, according to Councilwoman Kate Russell, who spoke on behalf of the Adirondack Christmas on Main Street committee.

Two ceremonial tree lightings will subsequently be held, one on Saturday, November 24 and the second a week later on Saturday, December 1.

These two ceremonial lightings will be performed as part of the Christmas on Main Street festivities, which have been extended to two weekends this year.

Event organizers anticipate new visitor crowds for each weekend of the event.

Hundreds of these visitors are expected to arrive at Thendara Station on scheduled holiday trips offered by the Adirondack Scenic Railroad.