Organization awards going to Gates, Foley, Noonan, and The Burnaps

The Central Adirondack Association (CAA) has a number of events planned for June, with the big kick-off on June 1 and 2 with the annual Thunder in Old Forge motorcycle event.

“Frank was one of the mainstays of the CAA,” said Town of Webb Publicity Director Mike Farmer. END_OF_DOCUMENT_TOKEN_TO_BE_REPLACED

Old Forge, Inlet, Long Lake, Raquette Lake, Indian Lake, and Forestport all have their own pages on the website where visitors can go to view a map and history of each area as well as web links to the information centers in each area.

According to CAA Events Coordinator Laurie Barkauskas, the new website is more event-driven and is a great way for visitors to find out what is going on across the Central Adirondack region.

Included on the website is a vacation guide that can be either printed or viewed as an electronic document. Within the document, readers will be introduced to each individual area with an accompanying activities section.

Also included in the guide is a map of area hiking trails.

In addition, the site has sections for attractions, and a complete business and emergency services directory.

Verona Labs will provide pick up of water samples for testing on Tuesday, June 12.

Local businesses or individuals that wish to utilize this service can drop off water samples by 10 a.m. on Tuesday at either the Forestport Town Hall or Adirondack Grocery in Otter Lake. Water samples may also be dropped off by 11 a.m. at the Visitor Information Center in Old Forge, or by noon at The Tavern in Eagle Bay or the Inlet Town Hall. END_OF_DOCUMENT_TOKEN_TO_BE_REPLACED

Support for the Town of Webb Historical Association and the Goodsell Museum comes from many sources.

The Historical Association Trustees would like to thank Paul Ritz of Old Forge Tree for his generous donation of labor and equipment to skillfully take down an unhealthy tree that could have easily damaged the barn if it fell on its own. George Pearson of StumpUgly, who arrived shortly after to grind up the stump, also donated his labor and equipment. END_OF_DOCUMENT_TOKEN_TO_BE_REPLACED

The Polar Bear Ski Club will hold its annual Tent Sale on Saturday, June 9 from 8 a.m. to 3 p.m. at the lot across the street from Randy’s Restaurant.

Donations are welcomed and can be dropped off at the site on Friday, June 8th at any time.

No donations will be accepted on Saturday. 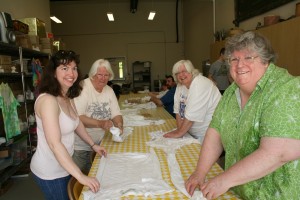 From right are Denio sisters, Debbie, Martha, and Maryellen, with cousin Londa Stenzel.

The Denio family holds a family reunion in Old Forge every year, usually over Memorial Day weekend. Each year they plan a variety of activities for the event and this year they all took part in a special tiedye activity at View.

View instructor Barbara Getty led the activity, offering step-by-step directions on how to dye their shirts in various patterns.

Once the shirts were finished and taken back to reunion central to be washed and dried, the Denio clan posed for a group shot wearing their shirts.

The family enjoyed lots of time together, but also branched out over the course of the weekend to do some things on their own.

“Then we came together again for a big family dinner,” Martha Denio said.

Maryellen Denio said that the tie-dye group activity was something new for the group this year.

“We’ve played softball—which was semi-hysterical,” she said, “and we usually play the German card game, Euchere. It’s lots of fun.”