The Town of Webb’s 2012 revaluation is scheduled to conclude in the coming months, and Jean Murdock, the town’s sole appointed assessor, updated the town board as to her department’s progress, at the board’s monthly meeting on Tuesday, January 10.

She also conveyed what the property owners should expect as the process winds down.

A final informational meeting is scheduled for Thursday, February 23, where general information will be shared with the public, according to Murdock.

Preliminary notices, regarding the new assessed values, will be mailed to Town of Webb property owners on March 1st. END_OF_DOCUMENT_TOKEN_TO_BE_REPLACED

Rex Germer, Building Principal at the Town of Webb School since 2008, was appointed as the new Super-intendent by the Board of Education, effective February 1, 2012.

He will replace Donald Gooley, who retires as Superintendent of the School District on January 31.

Germer was one of three candidate finalists for the position.

“When I got the phone call it really felt great. The (selection) process was long but it was necessary to get a feel for each of the candidates,” Germer said.

Germer, who is a 1990 graduate of the Town of Webb School, said that in his senior year book, he stated that he was going to come back to the area as a doctor.

“That was my plan, but education found me,” he said.

While doing graduate work, he was called upon by a friend to substitute for a fifth grade class. This led to his continuing interest and eventual degree in education.

END_OF_DOCUMENT_TOKEN_TO_BE_REPLACED 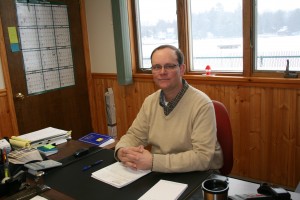 Supervisor Riehle said he had spent some time in the office over the previous weekend with his predecessor Robert Moore, where they went over some things and had a “changing of the keys.”

Moore, who served as supervisor for 10 years, did not seek reelection in 2011.

Riehle said he’s really excited to get going, as he looks ahead at some of this year’s challenges.

“We’ve got some big projects in place—TOBIE Phase 2, the East Side Pump Station, and the Lock and Dam project, and that’s going to be my concentration right now,” he said.

END_OF_DOCUMENT_TOKEN_TO_BE_REPLACED

The Webb and Adirondack Communities Health Care Research Committee wishes to announce that they will be sending out a survey to taxpayers of the townships of Webb, Inlet, Long Lake (Raquette Lake), and Forestport (Woodgate, White Lake and Otter Lake).

The purpose of the survey is to obtain public input about Health Care Services currently provided to our communities by the Town of Webb Professional Offices, and health care services that the public would like to have provided in the future.

We ask that you take a moment of your time and participate in this survey by completing it on-line at: www.surveymonkey.com/s/PSC
SRWB.  END_OF_DOCUMENT_TOKEN_TO_BE_REPLACED

Lori and Todd Brosemer of Old Forge announce the engagement of their daughter, Amanda Brosemer, to Seth Knoeller, son of Mark and Brenda Knoeller of Waterville.

The future bride is a graduate of Town of Webb High School and Platts-burgh State Univer-sity.

She is currently pursuing her Mas-ter’s of Social Work degree at Syracuse Uni-versity.

The future groom is a graduate of Waterville Central School and Wyotech University with a degree in Autobody Refinishing. He is currently employed at Maugeri’s Auto Body in Utica.

Despite the ultimate loss (53-34) attendees were treated to Greg Hunkins’s 21 points. Other contributors were Ethan Kress with 6, Parker Clemans with 5, and Kenny Pastore with 3 points respectively. END_OF_DOCUMENT_TOKEN_TO_BE_REPLACED

The Kiwanis Club of the Central Adirondacks has announced that its Student of the Month for January is Gabriella Pedraza.

Gabriella is the daughter of Victor and Maria Pedraza of Old Forge and is a senior at Town of Webb Union Free School in Old Forge. END_OF_DOCUMENT_TOKEN_TO_BE_REPLACED