Wow. THANK YOU. I would like to take this opportunity to thank everyone who turned out to vote in this year’s elections. What great voter turn out! My congratulations to Ted Riehle.

Personally, I’m very proud of your votes of confidence— especially considering I ran on an Independent platform.

Linda, Marie, Bob, Lisa—thank you for your undivided support, hours of campaigning, assisting with the Town Hall meetings and your objective opinions and constructive criticism. GREAT TEAM. Are you available for 2013?

To my silent supporters, you know who you are. Thank you for your encouragement.

On Thursday, November 17, Leilani Ulrich delivered her opening remarks as she presided over her first meeting as the Adirondack Park Agency’s (APA) newly appointed chairwoman.

Her appointment had been announced last week by New York State Governor Andrew Cuomo. Following is a transcript of Ulrich’s address to the APA board of commissioners.

Today is history. My name is Leilani Crafts Ulrich. As the first woman Chair of the Adirondack Park Agency—the first chair from Herkimer County, I welcome the first APA Commissioner from St. Lawrence County to sit at table with the first woman APA Executive Director, as this Agency begins deliberation of the largest project ever to come before the APA.

For my Mother, my daughters-in-law and granddaughters—for girls and women known and unknown, I am delighted to mirror each of our aspirations and to have the privilege of building on the work I have done in the past seven years here at the Agency and now in my appointment as Chairwoman. My thanks to my predecessors for their service and dedication to this agency and for their efforts which paved the way for this day. And my deepest thanks to Gov. Cuomo for his trust and confidence in conferring this historic honor.

END_OF_DOCUMENT_TOKEN_TO_BE_REPLACED

The letters “ADK” spelled out in white birch branches were added to the Christmas decorations at the Point Park at the busy corner in Old Forge on Monday, November 21 by volunteer decorators Tom Smith and Stuart deCamp.

The sign, which was constructed from wood provided by Mark Eddy of Haderondah Company, was outlined in white lights, and will be lit along with the Christmas Tree at 6:30 p.m. on Friday night.

Driving north along Route 28, just outside the village of Old Forge, sits a small blue building, which up until last summer sat lonely and vacant. 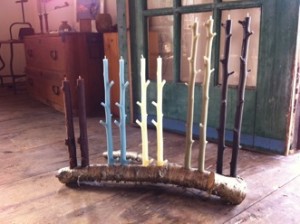 That was until Doug Collum of Syracuse and Old Forge, ignited some life into it and began making his signature product, Stick Candles.

Doug’s Stick Candles are handmade beeswax candles in the shapes of sticks that have been cast from Maple, Cedar, Hickory, Ash, and Bamboo trees.

Doug said the idea was inspired by his mother’s quest to find similar candles she had received as a gift many years prior.

“My mother had been given a pair of stick-shaped candles for some occasion, which she kept for a really long time because she loved them so much. Eventually she did burn them, but she forgot who had given them to her and where they had been purchased,” Collum said.

“So, one year I asked her what she wanted for Christmas, and after she explained her situation to me, I told her that it would be no problem to find them.” END_OF_DOCUMENT_TOKEN_TO_BE_REPLACED

Webb enforces structural zoning according to own definitions

Not to be confused with definitions from the NY State Uniform Fire Prevention and Building Code or the Adirondack Park Agency, these definitions are straight from the Town of Webb Zoning Ordinance.

Each statute, law, ordinance or regulation usually has definitions that are used to clarify or define certain terms or phrases.

Each is used to administer or enforce the provisions of the applicable statute, law or regulation. END_OF_DOCUMENT_TOKEN_TO_BE_REPLACED

Jim Kiefer, owner of Shelter in Old Forge, will host a Gallery Reception and Open House for nature photographer John Radigan on Saturday, December 3 from 2 to 4 p.m. 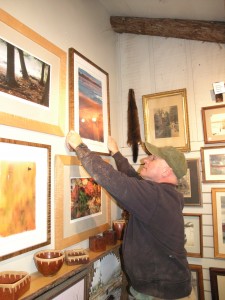 Event guests will have the opportunity to view and purchase Radigan’s photographic work in custom hardwood frames created by Kiefer.

Radigan, an Ohio native who has vacationed in the Old Forge/Inlet area for most of his life, became acquainted with Kiefer years ago through their mutual involvement with the Adirondack Photography Institute.

Co-founder of the organization, Radigan serves as its executive director.

The organization’s mission is to foster the collaborative protection of the Adirondack Park while also raising the awareness of the Park as a world-class destination through educational programs related to art and science as they relate to nature. END_OF_DOCUMENT_TOKEN_TO_BE_REPLACED

The Old Forge Ballet Company presented two performances of its annual holiday production of The Nutcracker at the Strand Theatre on Saturday, November 19th. 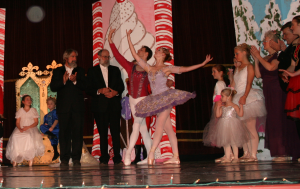 The Nutcracker cast takes its bows following the November 19 evening performance at the Strand Theatre. Photo by Carol Hansen

The cast included students of the ballet company and members of the community, and featured guest artists and principal dancers, Jennifer Grapes- McIntyre and Darren McIntyre from the acclaimed Milwaukee Ballet.

“We are so pleased that so many came to the Strand and enjoyed the two performances.

It was our first year of doing a matinee, and we were extremely thrilled to see so many young people in the audience,” said Ballet Company spokesperson, Linda LaDue.