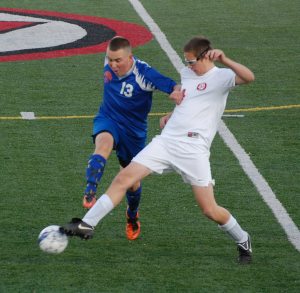 The first goal of the game was scored in the third quarter by Webb’s Kevin Kress and was followed by a second unassisted goal by Connor Rockhill minutes later.

Following the win, the Webb team will face fourth seeded Remsen in the Sectional Finals on Saturday, November 5 at 5:30 p.m. at Lowville High School.

The new artificial turf field is located directly behind the high school.

For more coverage of Webb’s run to the finals this past week, see Chuck Walley’s report 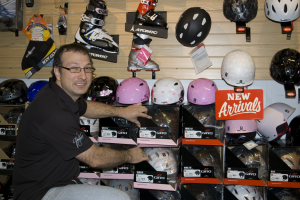 “It’s a fun day because everyone is excited for the season to start and it is the first time of the season that the McCauley family gets together,” said McCauley Mountain Manager Steve Uzdavinis.

New and used equipment will be available by consignment for purchase throughout the morning.

Those wishing to contribute items for the consignment sale may do so by bringing items to the Chalet between 5 and 7 p.m. on Friday, November 4, or between 8 and 9 a.m. the day of the event. END_OF_DOCUMENT_TOKEN_TO_BE_REPLACED

J.B. Herron—or James B. Herron, Jr. as his name will appear on the ballot in November—is seeking reelection to his seat on the Town of Webb Board.

He is a Republican residing in Old Forge, with his first four-year term due to expire in December.

As one of two Republicans running for two open seats on the Board, Herron was not involved in a primary.

“Basically I’ve been trying to work on efficiency in local government and in the operation of our departments,” Herron said.

A main focus during his first term has been bringing efficiency to Webb’s recycling program. END_OF_DOCUMENT_TOKEN_TO_BE_REPLACED

The Polar Bear Ski Club will host a Spaghetti Dinner at the Inlet Emergency Services Building on Route 28 on Thursday, November 10.

The menu includes spaghetti and meatballs, salad, bread, a drink and a cookie.

All proceeds will benefit the Polar Bear Ski Club.

This has been a very difficult campaign. Running against an incumbent is like running up a hill with your hands tied behind your back, but I’m an old Marathon runner and I know where my strength is and how to get to the finish line.

The Town of Webb has been my home for forty years and if I am elected as your County Legislator on November 8, I am determined to make a difference in District 15.

I will set my goals and work hard to achieve them. I have always been a hard worker. I believe you have to work hard to get the job done. END_OF_DOCUMENT_TOKEN_TO_BE_REPLACED

To the Editor and the residents of Webb:

With the election quickly approaching, I wanted to take one last opportunity to reach out to the voters.

As a Department Head for the local Waste Water Treatment Plant, over the last 14 years I have proven my ability to effectively work with changing Town Boards and Departments on a variety of projects.

My experience in networking with officials, local groups, State Agencies, professionals and the public is an important asset for the position I am seeking as your Town Supervisor. END_OF_DOCUMENT_TOKEN_TO_BE_REPLACED

First, I would like to thank you and everyone at The Weekly Adirondack for allowing a great forum for all the local candidates.

It was fun, informative, and I think the community really got to know the candidates they have to pick from this election season

I’m sure I speak for all when I say your paper has allowed a great opportunity for candidates to share their views, in detailed fashion, with readers that also happen to be our families, friends and neighbors.

Thank you also, to everyone who has extended kind words on the campaign trail. It has meant a lot to me, and I promise to continue serving your interests in the county seat of Herkimer. END_OF_DOCUMENT_TOKEN_TO_BE_REPLACED