The Museum Committee of the Town of Webb Historical Association has begun collecting artifacts and information for an upcoming exhibit, “Medicine Up North”, that will be on display at the Goodsell Museum.

The exhibit, which is scheduled to open on Friday, November 25, will remain on display through October 2012.

The Museum Committee is currently collecting information from residents connected in any way with the local health care industry.

They would also be interested in hearing stories about experiences with local doctors, dentists, nurses, pharmacies, and health care treatments.

Those with items to loan or stories to share can call the museum at (315) 369-3838 to schedule a time to meet. END_OF_DOCUMENT_TOKEN_TO_BE_REPLACED 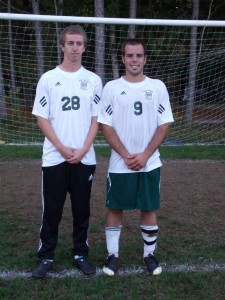 Rockhill, a freshman majoring in Forestry, played midfield for the Bobcats. He is is one of ten freshman on the PSC roster.

Due to his speed and aggressive defensive play, he adapted quickly to the college game.

He was one of the first players off the bench and received playing time in almost every game. 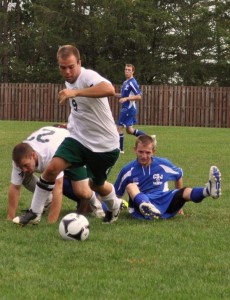 Riedman, a senior, is also majoring in Forestry. A full back and four-year starter, he is also co-captain of the team.

Riedman’s aggressive play anchored a defense that had eight shut-outs this season. He also scored one goal and had one assist from his fullback position.

Paul Smith’s College is a member of the Yankee Small College Conference (YSCC) which is part of the United States Collegiate Athletic Association (USCAA).

The Yankee Conference has two divisions and has a total of 15 members representing the states of New York, Vermont, New Hampshire and Maine.

The top three teams from each division were invited to the conference tournament in Concord, NH on October 22 and 23. END_OF_DOCUMENT_TOKEN_TO_BE_REPLACED

Many years ago we lived in a big old house at the edge of a small country village. It supposedly was one of the first in the village, a stately old federal style that lent itself to visions of the past.

From the records we researched from handwritten deeds in the County Offices, the house was built sometime in the late 1800’s.

Behind the house was a rather rickety old three-stall barn, which had been the livery stable for the big hotel that stood on Main Street.

The old hotel was long gone, but the iron rings were still in the barn where the horses we hitched after a long day of work. END_OF_DOCUMENT_TOKEN_TO_BE_REPLACED

Clogging the blade while carving out special Halloween memory

It was the last Saturday in October of 1978 and my sister Erin and I were carving pumpkins on the kitchen table.

Erin went at her pumpkin with both hands, carefully separating the seeds from the stringy guts.

I, on the other hand, was more interested in using my Swiss army knife to make a perfect scary face.

The 12-function knife was a birthday present and upon receiving it I imagined a million uses for it.

It included a razor, saw, spoon and fork and I invited every opportunity to pull it out of my pocket and tackle a task.

I used it to eat my cereal a few mornings, and I tried to cut down a few trees with it too.

I even used it to pull some nails out of an old board to use as a paddle for a raft my friend Eddie and I had built. END_OF_DOCUMENT_TOKEN_TO_BE_REPLACED

We spent last weekend in Connecticut attending the wedding of the dear friend of our daughter, who served as matron of honor.

So we got to spend some quality time with our son-in-law Alex and lots of other twenty somethings.

Plenty of time to chat and share my vast array of marital wisdom—like it or not.

The conclusion I came to?

These kids spend waaaay too much time connecting with each other via texting, tweeting, twitting and whatever the hell else they do.

All day, every day, almost every flippin minute, they are “in touch.”

Dave and his big elk rack

Here I sit in beautiful Carbondale, Colorado. After three days of Elk hunting there is no meat in the freezer yet. The weather has been great.

Though the temperatures have been in the 60’s during the day it’s been cold enough at night to put ice on the beaver ponds in Cattle Creek.

Once again we are staying at Bob and Betsy Schenck’s cozy cabin overlooking snow-covered Sopris Mountain. Their home cooking is the best and enjoyed before and after a long day of hunting.

My hunting companions, Art Gallo of Boonville and his son-in-law Bob Bernesby of Long Island, and myself have covered several miles in both Cattle Creek and the Fender Ranch.

We’ve all seen game but have not taken any shots yet.

The first morning in Fenders I went on watch at daybreak. I just got to the spot and saw spikes from a bull Elk sticking over the sage meadow.

I ducked down and could still see the entire animal. END_OF_DOCUMENT_TOKEN_TO_BE_REPLACED

The trees are almost completely bare and Halloween decorations have been sprouting all over, which can only mean one thing… the Fall sports schedule is winding down.

Still, there are Sectional outings for two of the three Varsity teams and, while the girls soccer squad didn’t quite make the playoffs, they did close their season with a bang.

That said, let’s see what’s happened since we last visited.

A huge contingent of schools was on hand for the Center State Conference Championships held on Saturday, October 22 at Ilion.

To be honest, this has been one of the strangest years on record for our runners. END_OF_DOCUMENT_TOKEN_TO_BE_REPLACED