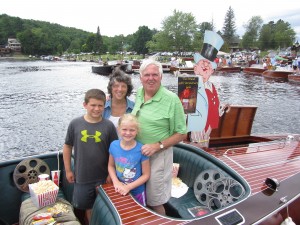 Fifty-three boats were on display for the 23rd annual Antique & Classic Boat Show at the Old Forge waterfront on Saturday, July 13th.

Participants came from as far away as Virginia, Pennsylvania, and Connecticut as well as all over New York state and up and down the Fulton Chain.

In addition to viewing the boats and meeting with their owners, visitors took free rides on Dunn’s Boat Service’s Chris Craft, Grace, and children were given rides on the Adironduck.

Awards represented a new variety of winners, according to Morrison, and were presented Saturday night in the following categories: 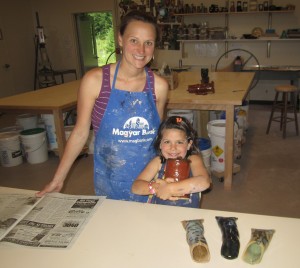 View is offering weekly art and pottery camps throughout the summer for children ages five  to nine. Sign up is on-going and students can sign up for a single or multiple weeks.

Classes run Monday through Friday with art camp held from 10 a.m. to noon and pottery-handbuilding camp from 12:30 to 2 p.m.

Pre-teens and teens can sign up for wheel thrown pottery camp Monday through Friday from 12:30 to 2 p.m.

Fees vary and discounts are available for members or if you sign up for multiple weeks. For more information or to register, call View at (315) 369-6411.

The 23rd annual Fulton Chain Ren-dez–vous of the Antique and Classic Boat Society will be held on Saturday, July 13. Over 50 boats will be on display at the Old Forge lakefront for public viewing from 10 a.m. to 2 p.m. at no charge.

The show includes a mix of classic favorites and will also feature some boats entirely new to the event.

Deke Morrison will display his 1926 Hackercraft and Ed Mitchell of Second Lake will be showing his classic Leighton.

“The Leighton is of particular interest because it’s lived on the Fulton Chain of Lakes since its birth in 1903,” said Carol Hornick of Old Forge, a co-organizer of the show.

Another new boat that can be viewed at this year’s show is 21-foot Chris Craft Classic Runabout, added Hornick.

Dunn’s Boat Service will be offering free rides aboard their antique Chris Craft vessel, Grace,  throughout the show.

Promptly at 2 p.m., the fleet will take off for a grand parade though the 1.5 mile channel that marks the beginning of the Fulton Chain of Lakes.

Awards will be given in a number of categories including historic, antique, classic, contemporary, and Exhibitors’ Choice. The viewing public may cast their votes for the People’s Choice Award.

There will be exciting events on land as well including canoe raffles, said event co-organizer Deke Morrison.

The Fulton Chain of Lakes Association (FCLA) will host an invasive species table to answer questions, provide information and serve as a drop off for aquatic plant samples.

Samples should be placed in a ziplock bag with a note attached, giving the day the plant was found, its location and the contributor’s name and phone number.

Lunch and snacks will be available for purchase.

The third annual Broadway Meets Opera performance at View will be held Thursday, July 18 at 7:30 p.m. at Gould Hall.

The first half of the performance features operatic pieces while the second half will cover broadway favorites in a combination of solos and duets. The diversity of pieces are intended for broad audience appeal. END_OF_DOCUMENT_TOKEN_TO_BE_REPLACED

The exhibition and sale will take place from 10 a.m. to 6 p.m with a reception to meet the artists from 6 to 8 p.m.

Last year over 200 people attended the event, and some artists sold out of their work. END_OF_DOCUMENT_TOKEN_TO_BE_REPLACED

The fire was extinguished and there were no reported injuries. The restaurant experienced some water damage but was able to open the same day, Bogardus said. END_OF_DOCUMENT_TOKEN_TO_BE_REPLACED

The Jolly Moosers will host their annual Bake Sale, Craft Show and Flea Market on Saturday, July 13 from 9 a.m. to 2 p.m. at the Big Moose Fire Hall.

Local crafters and bakers from Old Forge, Boonville, Big Moose and neighboring towns will be selling a variety of items such as baskets, wooden items, rag rugs, knitwear and baked goods, too. For the first time, frozen meals including soups will also be sold.

The Big Moose Fire Company will be putting on their fundraiser at the same location with a chicken BBQ meal for $10. That will start at 11 a.m. until they are sold out.  END_OF_DOCUMENT_TOKEN_TO_BE_REPLACED