A chapter closes, another begins 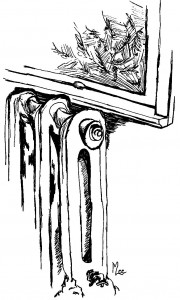 It was the last of my many days at the Inlet Elementary School having spent the past seven years of my life learning such tasks as reading, writing and long division.

I began reflecting on some of the activities I engaged in throughout those school years.

We painted murals with our feet in kindergarten, and in the first grade I made my first picture book about animals with imperfect spelling.

I wrestled with cursive writing and fractions in the third grade.

And by the time I reached the fifth and sixth grades I began exploring my own thoughts and wrote essays—though I thought taking a spelling test was about as pleasant as a trip to the dentist.

Those are all memories I could leave behind, but one thing I was really going to miss was sketching the old cast iron forced water heaters that were in every room of that little red and white building.

They were a constant companion in each of those seven years, thumping in the winter and cold on this late afternoon.

It was the last day to clean out my desk filled with drawings I made when I was supposed to be doing my class work.

I pulled the covers made of brown paper bags from my books.

The covers were riddled with what might be called Adirondack kid graffiti.

I stacked my books on top of each other, noting the list of names of those who had used the books in previous years.

Mine was seventh in line and I began to wonder whose name would be scrawled on it next year.

Packing up my desk would be the last action performed before I walked out that door for the final time.

Even though I had half-filled a trash can with what I found in my desk, enough remained to fill an old orange crate of stuff I would be taking with me.

I did not feel sad about leaving.

My head was more occupied with thoughts of all the free days I would have to fish, hike, swim and explore.

I had ridden my bike to school that day. I mounted the seat and situated the box half-under one arm and half-perched on my thigh.

Then I started the two-mile uphill pedal to Limekiln Lake.

The smell of the hot pavement mixed with that of fresh cut grass as I made the turn to Limekiln Road.

From behind I heard the low throttle of Mr. Bird’s seaplane as it taxied into its Sixth Lake dock.

Ahead I could hear the whine of the lumber mill’s giant saw grinding out boards.

The trip was slow and monotonous as I tried to balance that box while pumping  my twelve year old legs up the hill to the final stretch to home.

When I reached the peak I shifted the box to my other side, so I could use my rear brakes as I plunged down over Limekiln hill.

The aroma of Spruce and Beech trees, with a bit of greening raspberry bushes, slapped me in the face.

I coasted into the driveway with my brakes squealing and a box filled with elementary school memories.

This day was the dividing moment between childhood and becoming a teen. It not only marked the beginning of summer, but also the end of a chapter of Growing up Adirondack.