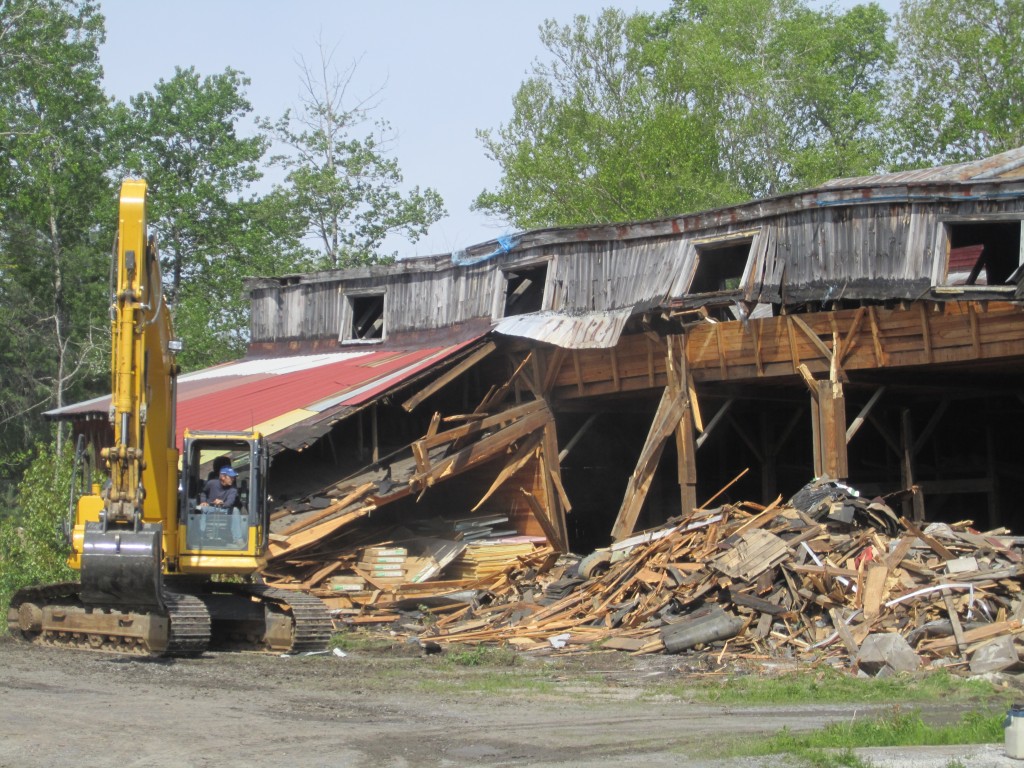 A Hunkins Excavating crew began work on razing one of the buildings at the Foley Lumber Company complex along the Moose River in Thendara—the site of the former mill operated by George Deis and Son—on Tuesday morning, May 28. The building was constructed in 1926. 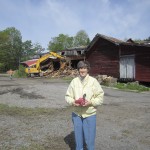 Louise Foley at the site of the Foley Lumber Company in Thendara with the demolition taking place behind her. Photo by Wende Carr

Louise Foley, current owner of the property, was there to supervise and photograph the process. She said two buildings are being taken down because they are no longer structurally safe.

One of the oldest buildings, built in 1899, will be retained and will have a metal roof repaired.

Another building, constructed in 1911, is in serious disrepair. It was used for generation of electricity at the time. The operators burned saw dust and wood chips created in the wood milling process, according to Foley. 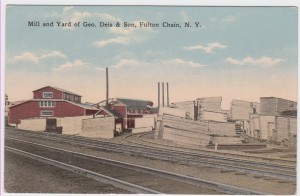 A vintage postcard representation of the Mill and Yard of Geo. Deis & Son, Fulton Chain, N.Y.

“Enough electricity was generated for camps in the area,” Foley said. “It was called Flip and Chain Electric, and I have copies of bills to people from that company, as well as a newspaper article in which the town government of Old Forge expressed upset at being charged too much for power for their streetlights. Old Forge then started its own power company.”

“My grandfather took over from George Deis and Son in 1918. So, it’s almost 100 years that the Foley family has been involved here. He (P.J., or Patrick Jeremiah Foley) ran it as a mill until the mid1930s, when companies could ship moulding in by train cheaper than they could make it. Then, he started selling off the equipment, especially during the war, when metal was needed.”

“About a year after the war, when my father came back from working as an electrical engineer for the Navy department, he took over the company from his father, and changed the name of the company to Foley Lumber and Hardware.”

“At that point, this facility was used for storage of lumber and deliveries would be made from there. A train car would pull in and open up. Slides were used to slide the lumber to whoever was down below and they’d put it in the proper slots, according to size. We kids would help with that.”

“My mom would substitute teach at school sometimes, and when the phone rang at 7 a.m., each of us kids would worry that it would be for our class,” she said.

From 1945 onward, Foley Lumber and Hardware Company was located where Wilderness Interiors is now on Main Street. Then, in 1969, when The Moose-head went bankrupt, Louise’s father, John Foley, bought the property and moved the store there.

Louise said her father did not anticipate people coming in and asking if they could go up and see the room where they spent their honeymoon. It happened so many times that  he told his kids he felt like a tour guide.

When Louise’s brother Jack returned from his military service in 1970 or 1971, he joined his father in the business and put up a storage building behind the store on Main Street. From that time, the Thendara site served as an excess storage location and ceased being active.

In 2002, Jack sold the company based in Old Forge., but the Thendara property remained in the family.

Louise said that as a kid, she always liked the property and enjoyed looking out on the Moose River.

“I’m hoping I’ll build a house on the hill and be able to kayak where there aren’t powerboats and personal watercraft,” she said.