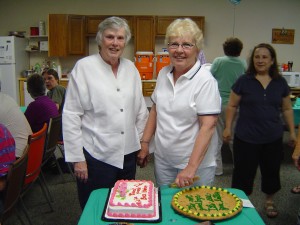 Dwyer, who has been pastor intern of the summer seasonal church for the past seven years, has recently relocated to Williamsburg, VA.

Prior to becoming the pastor, Dwyer had enjoyed over 20 summers on Sixth Lake with her family. During those years she was a communicant of the Church of the Lakes and became familiar with the Inlet community. Later, she became a year-round resident when she and Dale Huebner took ownership of Bear Up North Cottages in Inlet and the Bear in the Tub laundromat in Eagle Bay.

“Under Robin’s leadership, a number of new people were drawn to the church and became very involved with the church and its mission. She established a strong connection with the Kids for Utica organization, which became part of the church’s mission. She also worked closely with Niccolls Church and led the congregation in supporting its mission with Uganda. She will be sorely missed,” said Rev. Lorrie Skinner, Moderator of the Session.

A mother of five, Dwyer obtained her Bachelors Degree from William Paterson University where she received the Norma Van Dyke Award for excellence in women’s studies. She received her Masters of Divinity at the Drew University School of Theology, working hands-on in churches, hospitals and with the AIDS community.