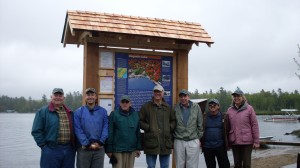 A large group of dedicated paddlers gathered near the town dock in Raquette Lake on Saturday, May 25 for a ribbon cutting and dedication ceremony for the Northern Forest Canoe Trail’s newest kiosk.

Raquette Lake is one of the many canoe launches along the NFCT, which at 740 miles is the largest canoe trail in the U.S.

It originates in Old Forge and traverses through Vermont, New Hampshire and Canada, and ends in Fort Kent, ME.

Alan Bennett, NFCT board member, began the dedication by thanking the individuals who worked hard in preparing the kiosk area for the poplular launch site.

Bennett said nearly 50 people have completed the entire trail in one trip—the record being 23 days by a couple from Old Forge. However, he added that most people only experience parts of the trail, with the majority beginning at the Raquette Lake site.

They offered  a special thanks to Jim Dillon for preparing the site, as well as Raquette Lake Committee members Sue and Kevin Norris, James Kammer, and John Sammon for working hard throughout the fall and winter on the design and wording of the interpretive panel.

Additional thanks went to Kevin Norris for constructing the kiosk.

The NFCT was the brainchild of Kay Henry, former president of Mad River Canoe Company, and Rob Center who joined together with Ron Canter, a cartographer for the Federal Aviation Administration, in creating 13 paddler-friendly maps that cover the entire trail.