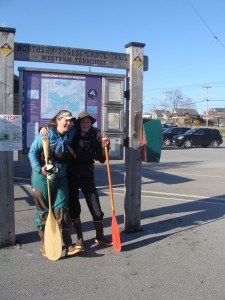 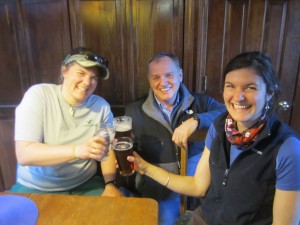 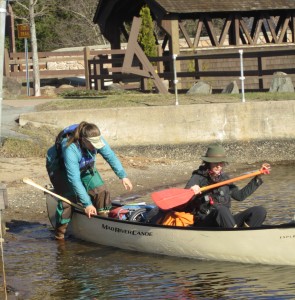 Both Rooney and Carlson participated in St. Lawrence University’s (SLU’s) Adirondack semester as seniors. During that program, they lived in a yurt at Massawepie Boy Scout Camp, home of the SLU ADK semester, near Tupper Lake.

Since graduation, Carlson has been helping to run the Adirondack semester program for SLU. When she’s not doing that, Carlson works with an environmental non-profit group in Maine.

A large group of her former students at SLU hosted the pair for a dinner just before they headed to Old Forge. One of them sent Carlson out with a rod and fishing flies he tied specially for this trip.

They intend to do some fishing and foraging for wild edibles en route. Food they packed includes cheese, nuts, oats, pasta, and dehydrated foods.

They’ll restock perishables like produce as they pass through towns and will likely stop for ice cream when opportunities present themselves.

“The idea of a long-distance trip has always intrigued both of us,” Carlson said. “I first learned about it in seventh grade, when our school’s custodian hiked the Appalachian Trail. We corresponded with him, and in eighth grade, I’d go into his office and hear trail stories.”

“It’ll be neat to experience the balance of being in the wilderness and passing through towns, encountering society,” Carlson said. “[Will] we want to engage in this town and have conversation, or do we want to just keep going and keep this as our trip, just the two of us?”

“We want to meet people and associate with them,” Rooney said, “but we’re also deliberately choosing to pull ourselves away. Who knows? We’ll see how we feel on day thirty.”

Books the paddlers are carrying include Skinny Legs and All by Tom Robbins, Peterson’s Field Guide to Edible Wild Plants, a star gazing book by Curious George author H.A. Rey, and We Took to the Woods by Louise Dickenson Rich.

The latter was written in the 1940’s, in and about the area of Magog Lake and Rapid River, an area through which the Northern Forest Canoe Trail passes.

Last year, Rooney worked in Juno, AK, as garden coordinator for a homeless shelter and soup kitchen. Prior to that, she worked on a Vermont farm and in outdoor pursuits in the Seattle area of Washington State.

Just prior to this trip, she was working at a sugar bush in Vermont.

The pair is planning to communicate with some Maine second-graders by postcard.

“Coming from a small, rural area is a beautiful thing,” Carlson said, “but we want to help kids see that anything is possible.”

Pengie the Penguin, Stanley the Owl and Little Biz, the acorn fairy are three inanimates who’ve secured passage with Carlson, who is close friends with each of the passenger’s young owners. She anticipates possible children’s stories of the characters’ adventures coming out of this excursion.

The paddlers will be resupplied twice, by Rooney’s parents in Vermont and by Carlson’s mom in Maine. Carlson and Rooney have promised to send Weekly Adirondack readers a postcard or two from the trail, when they encounter a post office.