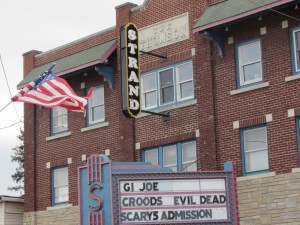 Bob Card and Helen Zyma of The Strand Theatre in Old Forge, and Nick Rose of CAP-21 have been working together to raise funds to save The Strand and 10 other North Country theaters before the film industry’s mandatory digital conversion takes place this fall.

They have been working with the Adirondack Film Society and the Adirondack North Country Association (ANCA) to create a Regional Theater Alliance to help raise awareness and solicit donations to help offset the costs of the conversion.

Through their partnership, a fundraising campaign titled “Go Digital or Go Dark” has been created to help coordinate a community-based campaign as well as an outreach to major donors. ANCA’s foundation sponsors for the campaign are Adirondack Bank and Community Bank.

As part of the campaign, movie posters and donation boxes will be set up at each of the participating theaters. Also, an individualized promotional movie trailer created by filmmakers Aaron Woolf and TJ Brearton will be played in each theater prior to the start of films.

According to Card, the 10 participating theaters collectively need $1.5 million to make all the necessary changes. Through the campaign, theater owners are expected to raise 75 percent of their individual costs with ANCA helping to raise the remaining 25 percent. The ANCA funds will be distributed to the theaters through a series of grants.

“We are feeling hopeful so far, and we’ve had a lot of support already,” Card said in reference to the local fundraising efforts by Billy’s Restaurant, Randy’s Chicken, and the Pointed Pine Quilters, as well as donations given by community members.

“It’s a crazy thing. It’s not like we are borrowing to make a profit by adding extra auditoriums—we are trying to keep our livelihoods,” Card said.

There are many options for donating to the campaign. Checks can be sent to ANCA where the donor can designate the gift for either a specific theater or for the general fund. All donations made through ANCA are tax deductible.

Checks can also be sent directly to the theater of one’s choice, or simply drop a donation in the collection boxes in the theaters’ lobbies

Another way to make a tax-deductible donation is online through The Razoo Foundation. By going to http://www.razoo.com
/story/Go-Digital-General, visitors will be able to make online donations to either the general fund or to the theater of their choice.

Those wishing to make a donation through ANCA are asked to mail checks to: Adirondack North Country Association, 67 Main St., Saranac Lake, NY 12983. Please indicate the theater and community of your choice on the check.