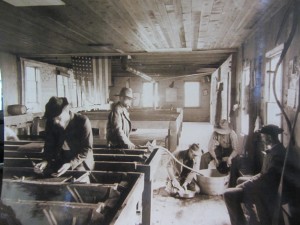 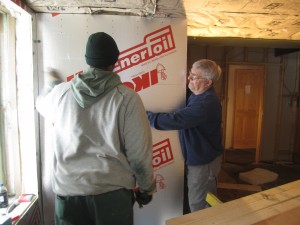 Justice Jack Graham and an inmate worker do insulation work at the Town of Webb courthouse. Photo by Wende Carr

The renovation project on the Town of Webb Courthouse on Route 28 in Old Forge began on March 1 under the supervision of Town Justice Jack Graham.

The renovations, which according to Graham will be completed in three phases, one per year, allows physical space for the judges and court clerks to operate while the work is being done.

Every work day, a construction crew from Mid-State Correctional Facility in Marcy, under the supervision of a corrections officer, travels to Old Forge to work at the courthouse.

Two of the inmates are contractors by trade. Those who aren’t are eager to learn the trade, according to Graham.

“It’s helping them and helping us,” he said.

“It makes my day go better,” said one of the men, who is a union contractor and mason by trade. “I’m used to doing taping and sheetrocking, and it’s better than sitting in the prison.”

Graham expressed gratitude for the work they are doing, saying it wouldn’t have been possible to get this project approved if construction crews had to be contracted for the job.

Phase One, now in progress, started at the bench area. Dark paneling is being replaced with blonde wainscoting up to chair rail height, with a medium shade of green paint above the chair rail.

Mid-State workers are currently sheetrocking the judges’ and court clerks’ offices. They are also moving walls to increase much-needed office space, building a utility closet, and creating a room where the jury can meet.

Graham said the building is being insulated for the first time in its long history.

The building, which currently houses the downstairs courthouse and American Legion space upstairs, was initially built as a fish hatchery.

Historical documents show that the hatchery was constructed in 1885 at Cold Springs on Fourth Lake. It began operations in 1886 and was soon moved to First Lake, near the Forge House.

According to the historical accounts written by Charles Herr, both sites had problematic water supplies for hatchery purposes, so the building and its contents were floated down to the Old Forge Pond, skidded around the dam and drawn by horses to the building’s current location.

The hatchery operated there until 1934, when the Conservation Commission made the building available to the William Covey American Legion Post.

After the state turned the building over to the Town of Webb, it housed a courthouse and jail after the jail cells were moved from the Thendara Town Hall to the building.  Later, the cells were removed and inmates were sent to Herkimer.

It’s a difficult building to work on because everything is old and nothing is plumb or square, Graham said. However, the end product will be a safer, more energy efficient building with more attractive rooms designed to suit the needs of an operating court system.

Back-up work on the building is being done by personnel of the Town of Webb Department of Public Works (DPW) when they aren’t busy with other assignments. Shawn Smith is installing all new plumbing, electrical wiring and heating ducts while Charlie Bogardus and Dana Pashley are doing the finish work.

“Without the town employees, I’d be lost,” Graham said.

The Town of Webb is funding Phase One of the project, which is projected to be completed by May 1.

Graham is applying for a grant from the Department of Court Administration, in the form of a J-CAP grant, for Phases Two and Three of the project.